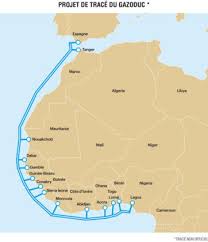 Nigeria’s federal government prepares to launch works to build a pipeline that will channel gas to Morocco through a combined offshore and onshore track.

The announcement was made by senior official at the Nigerian National Petroleum Corporation (NNPC), Yusuf Usman, during an interview with local NewsDirect newspaper.

Feasibility studies have been completed and Nigeria is about to take a “final investment decision for the project.”

After recalling the commitment of the leadership of the two countries to the project, Usman reaffirmed that the project “will pick up a lot of African countries. Some of these African countries have gas they will inject into the pipeline while some don’t have but can take the gas for development, if they cannot pay for the gas, they can get electricity.”

“It is this kind of vision that is required to lift Africa from the picture that you saw which is currently in the dark into light. It is a wonderful initiative to do,” he said.

Morocco and Nigeria agreed to build the pipeline in late 2016 during a visit paid by King Mohammed VI to Abuja. Feasibility studies have shown the technical and economic viability of the project expected to attract world gas giants.

The Atlantic pipeline project, which will channel Nigerian gas up to Morocco via 16 African countries with a total GDP of $670 billion, was devised by King Mohammed VI and Nigerian President Muhammadu Buhari to enhance African integration, regional trade and economic cooperation.

The construction of the onshore-offshore pipeline will be carried out progressively in phases spanning over 25 years. This landmark project is part of the South-South cooperation upheld by King Mohammed VI. It is expected to create a competitive regional power market and benefit all West African people, countries and their economies.

In December 2020, the Economic Community of West African States (ECOWAS) endorsed the Moroccan-Nigerian off-shore on-shore gas pipeline that will benefit 13 African countries instead of the Algerian ink on paper proposal of a tans-Saharan pipeline.

The endorsement sends a clear message of support for the Nigeria-Morocco pipeline that aims at fostering regional integration and strengthening energy security of West African states.

The offshore option for the West African pipeline is also safer compared to the riskier Algerian born-dead proposal of channeling Nigerian gas through the Sahara region where multiple terrorist groups operate.

The Algerian trans-Saharan gas pipeline is unfeasible as long as terrorist groups continue to operate in southern Algeria and northern Nigeria. It is also less beneficial to West Africa and more expensive and prone to destruction by terrorist groups.

Given Algeria’s diminishing gas export capacity, the Moroccan Nigerian gas pipeline will, besides helping West Africa achieve its energy security, help Europe have an alternative to reduce dependency on Russian and Algerian gas.