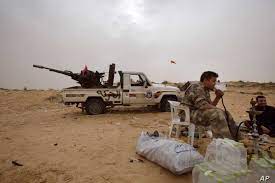 Several high-level security meetings were held on Monday June 14 in Tripoli to try to put an end to the clashes that have been taking place since Thursday in Ajaylat, a town located 90 km west of the Libyan capital.

The clashes resulted in eight casualties, including civilians. The Presidential Council, the authority that runs the armed and security forces in Libya, has called for an immediate ceasefire, under threat of intervention.

Despite the warning from the authorities in Tripoli, dozens of military vehicles belonging to the Zawiya militia headed on Monday to the town of Ajaylat, dominated by another local militia. The situation remains very tense. It is not known what triggered the clashes that have been going on for five days. The Ajaylat militia has also received reinforcements.

The fighting drove dozens of families to flee downtown Ajaylat. Militiamen used heavy weapons and shells fell on the market and on houses. According to press reports, stores were looted and burned, people were abducted.

The Presidential Council is once again faced with its powerlessness in the face of the militias’ power to fight whenever their interests clash. The militias and the mercenaries are the two biggest challenges facing the interim executive, which promised Libyans peace, security and stability at its inauguration in March.