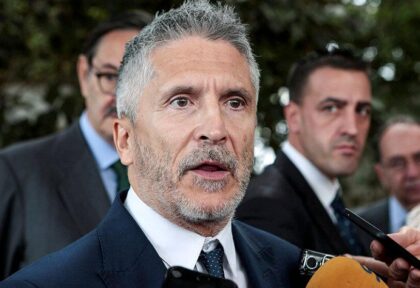 The Spanish Minister of the Interior, Fernando Grande-Marlaska, in an attempt to appease tension between his country and Morocco, has stressed the necessity to “continue building trust” between Spain and Morocco following the diplomatic crisis that has arisen due to the presence in a hospital in Logroño of the Polisario Front leader, Brahim Ghali, and the mass entry of immigrants into Ceuta, reports the news website atalayar.com

“…We have to continue building trust and let diplomacy move forward in a calm and tranquil manner in these terms”, the minister stressed this Tuesday in statements to the Spanish National Radio, RNE, recalling the “fraternal relations” between the “two important and united partners.”

He also echoed the remarks of his head of government by declaring that “Spain is Morocco’s best ally in the EU”.

He was asked about the situation of Brahim Ghali, who has been in hospital in Logroño for more than a month after entering Spain to be treated for the COVID-19 coronavirus and who appeared this Tuesday by videoconference before the judge of the Audiencia Nacional, Santiago Pedraz, on charges of alleged crimes against humanity, genocide and torture, among others.

“Let the judiciary decide, let the statement be made and, in accordance with the requests of the parties, let them decide what they consider appropriate and reasonable, and let us all be prepared for the judicial resolution”, said Grande-Marlaska.

Tension mounted between Morocco and Spain after the latter admitted Ghali with forged documents and under a false identity.

Grande-Marlaska explained that the decision to admit Ghali into Spain was “a humanitarian reason” and regretted the “extraordinary and exceptional situation” of the mass entry of immigrants from Morocco into Ceuta “which should not have happened”.

As to the migration issue, the Foreign Department had said that Spanish Prime minister Pedro Sanchez tried to mislead the debate about the root causes of the crisis by focusing on the influx of migrants and that Spain uses migration as a distraction from its breach of neighborliness with Morocco.

The genesis of the bilateral crisis is to be found in Madrid’s breach of neighborliness, the Moroccan Foreign Ministry said in a statement Monday, insisting that the essence of the discord with Madrid is to be found in the lack of respect and mutual trust shown by Spanish officials and in Spain’s hostility to Morocco’s sovereignty over its Sahara and Madrid’s connivance with the adversaries of Morocco’s territorial integrity.

For his part, the leader of the Popular Party (PP), Pablo Casado, accused the executive of failing to foresee the crisis, which risks impacting not only economic relations with Morocco, but also security relations.

“Cooperation against terrorism and the fight against drug trafficking is threatened,” said Casado, following Nasser Bourita’s response Monday to Pedro Sánchez, according to which Spain’s ambiguous position on the Sahara issue is at stake and is at the origin of the diplomatic crisis.

In a statement to Spain’s Europa Press, Pablo Casado criticized his government for its lack of diplomatic experience: “Foreign policy is very complex,” he said, recalling that few months ago he had warned against angering Morocco.