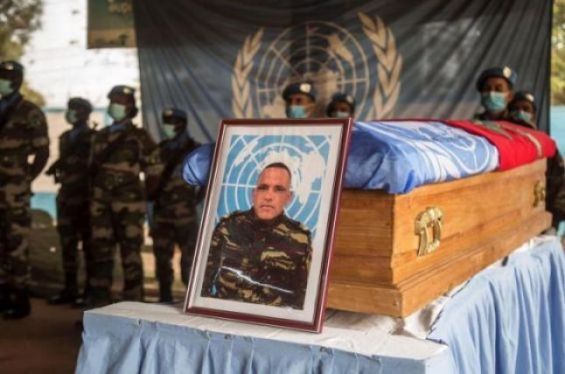 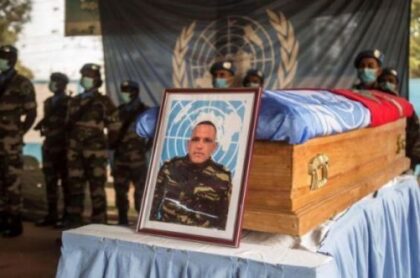 Moroccan Master Corporal Rachid Lamzaatar, who died on January 18, 2021 in the Central African Republic, was among the peace-keepers who were awarded posthumously the Dag Hammarskjöld Medal by the UN.

The Dag Hammarskjöld Medals were bestowed posthumously to the 129 military, police and civilian personnel who lost their lives in 2020 and earlier this year as the world celebrated the International Day of Peacekeepers on Thursday.

Earlier, the UN Secretary-General Antonio Guterres had lain a wreath at the Peacekeepers Memorial to honor the more than 4,000 women and men who since 1948 have lost their lives while serving under the blue flag.

Malicious acts, accidents and fatal illnesses – including COVID-19 – had all taken their toll on uniformed and civilian peacekeepers over the past year, he explained.

“We are forever in their debt…Their ultimate sacrifice will not be forgotten, and they will always be in our hearts”, he said.

“The challenges and threats faced by our peacekeepers are immense”, he said. “They work hard every day to protect some of the world’s most vulnerable, while facing the dual threats of violence and a global pandemic”.

Despite COVID-19, across all UN missions, peacekeepers have not only continued to “deliver their core tasks” but are also assisting national and community efforts to fight the virus.

Commending the dedication and bravery of UN peacekeepers, the UN Chief underscored that “they deserve our full support, and we must continue to work together to do all that we can to improve their safety and security and give them the tools to succeed”.

It currently deploys more than 1,700 soldiers and police in UN operations in the Central African Republic, the Democratic Republic of the Congo and South Sudan.

The International Day of United Nations Peacekeepers was established by the General Assembly in 2002 to honor all men and women serving in UN peacekeeping operations and to honor the memory of those who have lost their lives for the cause of peace. May 29 was chosen because it coincided with the first UN peacekeeping mission – UNUST – which began operations in Palestine in 1948.