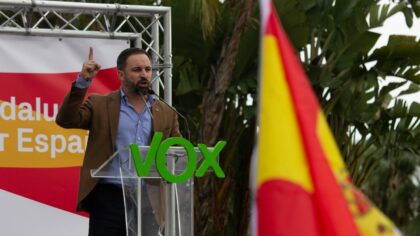 Spanish far-right and anti-immigrant groups have fueled their discourse with the migration crisis that was triggered in a context of a row between Morocco and Spain which has admitted Polisario separatist leader in secrecy using false documents and a usurped identity.

Instead of blaming their own diplomacy for undermining the partnership with Morocco, Spanish conservatives of the PP and far-right Vox in particular are using the migration crisis to serve their own racist agenda.

Vox in particular demanded a militarization of the border and called the influx of defenseless migrants an “invasion”.

Morocco had said that the migration crisis came following a political crisis caused by Spain which acted in connivance with Algeria and its separatist puppets against Rabat’s supreme interests on the Sahara issue.

Morocco rejected the humanitarian arguments put forward by Spain and demanded a transparent inquiry into the presence of the Polisario leader under false documents in Spain and urged the judiciary to bring him before a judge.

Xenephobic Vox and likeminded far-right groups refuse to look at the origin of the crisis and use the migration issue to strengthen their political position threatening to withdraw their support for PP in Andalucia, an event that may cause early elections there.

Anti-immigrant rhetoric is on the surge in Spanish media which hit a new low by calling Morocco abject names while looking the other way at the circumstances in which Polisario’s Ghali was admitted into the country.