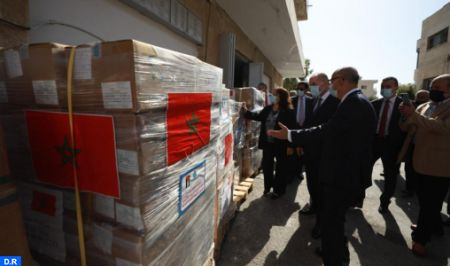 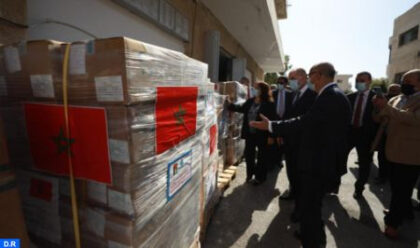 The urgent humanitarian aid sent to Gaza and the West Bank at the high instructions of King Mohammed VI, Chairman of the Al-Quds Committee, was handed on Thursday in Ramallah to the Palestinian National Authority.

The aid, which was sent to Marka International Airport in Amman, Jordan, before entering by land through the Jordan-Palestine border crossing, consists of 40 tons of basic foodstuffs, medicines for emergency care and blankets.

Adviser to the Palestinian President for religious affairs and Islamic relations, Mahmoud Al-Habbach, who was among the officials present at the aid delivery, described the royal move as a “generous gesture” which confirms once again the solidarity of Morocco with the Palestinian people.

“The Palestinian people need to feel supported by their brothers and friends, and the gesture of HM King Mohammed VI is part of this context,” he said.

She expressed her thanks to the Kingdom of Morocco, King, Government and People, for their efforts to support the Palestinian people and alleviate their suffering in the face of Israeli aggressions.

The Moroccan ambassador in Ramallah Mohamed Hamzaoui said the royal initiative translates Morocco’s unwavering and active solidarity with the Palestinian people and confirms its commitment to support the just Palestinian cause as well as its attachment to the two-state solution.

He stressed that the King, Chairman of the Al-Quds Committee, has always placed the Palestinian issue at the forefront of his concerns, combining international and regional diplomatic efforts with work on the ground through Bayt Mal Al-Quds agency, which plays a pioneering role in supporting the resistance of the inhabitants of the Holy city.