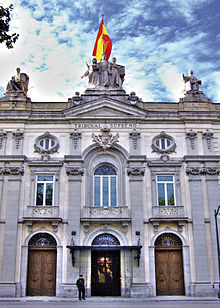 The Polisario leader Brahim Ghali, who is currently admitted in a hospital in Logrono in Spain, has been summoned to appear before a Spanish court over torture and kidnapping charges, one of his victims told MAP on Monday.

This summons, which takes place following a complaint filed by this victim, Fadel Breika, was also confirmed by judicial sources in Madrid, according to local media.

Citing official sources, Spanish outlet La Razon reported earlier Monday that the Polisario leader is expected to stand before judges at the 5th Central Court of Instruction on Wednesday in Madrid.

Two other senior members of the Polisario Front, Sidahmed Battal and Bachir Mustapha Sayed, have also been summoned to stand trial on the same day as Ghali, according to La Razon.

The decision to summon Ghali comes ten days after Polisario’s leader’s presence in a Spanish hospital was revealed by the media.

Breika, whose complaint was admitted by the Spanish courts last April, accuses the leader of the separatist front of being responsible for his kidnapping in 2019 from June 18 to November 10. “I was kidnapped for almost five months and tortured in the jails of the Tindouf camps just because I had asked for clarifications regarding the fate of Ahmed Khalid, who was kidnapped by the Algerian secret service since January 2019”, Breika told MAP.

“I had also denounced in social media the enlistment of child soldiers by the Polisario front as well as the violent acts of its leaders,” he added.

“Through this complaint and the appearance of this criminal and other leaders of the Polisario before justice, I demand that justice be done to all the victims of the atrocities of the Polisario,” he said.

Brahim Ghali, who entered Spain with a fake Algerian identity and a fake passport, is facing many legal complaints filed by both Sahrawis and Spaniards who have accused the Polisario leader of rape, kidnapping, torture, and forced disappearance.

An arrest warrant was issued against him by the Spanish authorities in 2008. In 2013, he was indicted by Spanish justice.

Since Spain admitted Ghali in connivance with Algeria, his victims have been putting pressure on the Spanish justice to apply the law on an equal footing and uphold its independence by bringing Ghali before justice.

Both ACAVITE which represents Canary Island workers and fishermen assassinated by the Polisario, and Sahraoui rights group ASADEDH were among the NGOs that urged the judiciary to enforce the law and arrest Ghali.