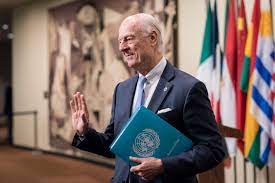 Italian-Swedish diplomat Staffan de Mistura has been reportedly picked by the UN Secretary General to be the next Sahara envoy in replacement of German Hosrt Kohler who resigned in May 2019 for “health reasons”.

The post of UN Sahara envoy has remained vacant for almost two years. UN chief Antonio Guterres had proposed the candidacies of former Romanian PM Petre Roman and ex-Portuguese Foreign Minister, Luis Amado to fill this post, but the picks were turned down by Algeria and Polisario, while Morocco had welcomed the proposed candidacies to advance the UN-led process engaged to find a lasting resolution to the Sahara conflict.

Washington and the Security Council have called lately on Guterres to expedite the appointment of a Personal Envoy for the Sahara. The UN Chief has responded, saying that he is determined to find a new Sahara envoy as soon as possible.

According to the well-informed website Axios, senior White House and State Department officials have held multiple discussions on the Sahara issue over the last few weeks.

“The decision that emerged from these discussions was not to reverse Trump’s policy (recognition of Morocco’s sovereignty over the Sahara) but to work with the Moroccans on appointing a new UN envoy for the Western Sahara in order to try and resume talks on possible autonomy for the sparsely populated territory,” wrote Axios, quoting two sources familiar with those discussions.

Staffan De Mistura has four decades of experience at the UN, in conflict-affected areas as well as in humanitarian agencies and therefore presents himself as a serious candidate to the position.

North Africa Post's news desk is composed of journalists and editors, who are constantly working to provide new and accurate stories to NAP readers.
NEWER POSTMorocco receives new batch of 0.5 million doses of Sinopharm vaccine Friday
OLDER POSTBiden will not reverse US recognition of Morocco’s sovereignty over Sahara – Axios