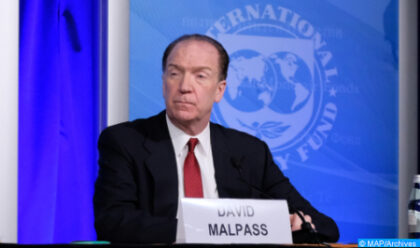 The President of the World Bank Group (WB) David Malpass has welcomed Morocco’s proactive and anticipatory strategy to mitigate the effects of the health crisis.

During a meeting held via videoconference with Minister of Economy & Finance Mohamed Benchaaboun, on the sidelines of the IMF/WB spring meetings, Malpass highlighted the readiness of the Bank to reinforce its support to the economic and social development of Morocco, the Ministry said in a statement.

Speaking at the meeting, which was also attended by the Governor of Bank Al-Maghrib Abdellatif Jouahri, Malpass stressed WB’s willingness to provide financial support and technical assistance to various priority reform projects undertaken by Morocco.

Benchaaboun, on his part, noted the relevance of the response measures adopted by Moroccan authorities since the outbreak of the COVID-19 pandemic, in order to limit the impact of the health crisis on the national economy.

In this regard, he urged the WB to further strengthen its support, financially and technically, in order to assist the Kingdom in its efforts to contain the effects of the crisis and implement its development program.

Governor of BAM Abdellatif Jouahri noted that the WB is called upon to support Morocco in some priority development areas, including national productivity resilience, informal sector integration, and digitalization.