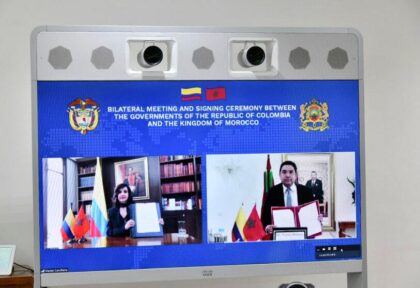 Morocco and Colombia agreed to offer each-others nationals visa free entry as part of a push to further strengthen their bilateral relations.

The deal aims for waiving visa requirements for less than 90 days stay benefiting holders of ordinary and diplomatic passports.

The agreement was signed during a video conference between Morocco’s Foreign Minister Nasser Bourita and his Columbian peer Claudia Blum.

The two countries also signed an air transport deal and agreed to cooperate to counter drug trafficking in addition to inking an agreement to cooperate in the academic, cultural and scientific fields.

During the talks Columbia renewed its position in support of Morocco’s autonomy initiative as a solution enabling a political, realistic and lasting settlement to the Sahara issue.

In this regard, the Columbian foreign minister underscored the need to safeguard Morocco’s territorial integrity and Rabat’s efforts to reach a political, realistic and mutually acceptable solution within the framework of the UN.

For his part, Bourita commended the efforts undertaken by Columbia to help the refugees who were forced to leave their homes in Venezuela, adding that both Morocco and Columbia share the same vision regarding the need to protect the rights of migrants and refugees.

In this respect, Bourita expressed Morocco’s support for the Columbian initiative of “Peace with Legality” to promote regional peace and stability.