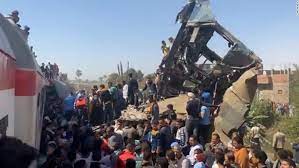 The African Development Bank, AfDB, will extend Egypt a credit line of €145 million to help the country improve the railway system safety and to increase the network capacity.

“The planned upgrades are expected to benefit low-income Egyptians, about 40 percent of the population, who rely on trains as an affordable mode of transport,” the bank said in a statement.

The credit facility comes days after a deadly train accident in the southern governorate of Sohag, last month.

A speeding passenger train collided with another that had suddenly stopped. The incident left dozens of injured and at least 18 people killed.

Transport Minister Kamel al-Wazir blamed human error as cause of the accident and authorities which promised though sanctions for those responsible of the collision rounded up eight people, The New Arab reports.

Egypt has witnessed several train accidents in recent history. The deadliest occurred in 2002 when 373 people died in a fire that ripped through a crowded train south of Cairo.