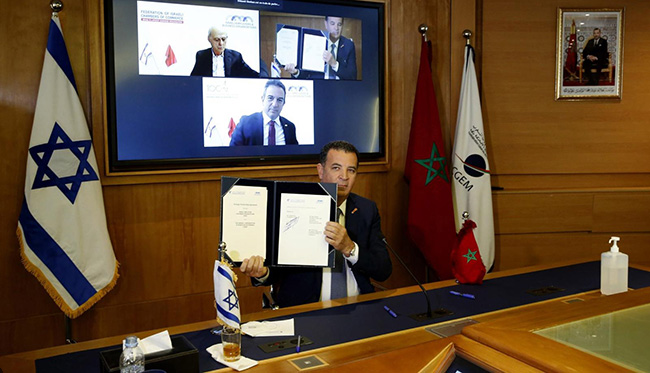 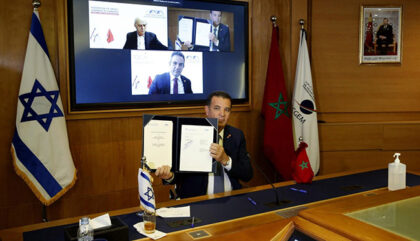 Morocco’s General Confederation of Enterprises (CGEM) and the Israeli Employers and Business Organizations (IEBO) signed a strategic partnership agreement to promote economic and trade relations as well as technological development between Morocco and Israel.

The partnership agreement was signed Monday during a videoconference by CGEM President Chakib Alj, President of IEBO and of Manufacturers Association of Israel (MAI) Ron Tomer, as well as by President of the Federation of Israeli Chambers of Commerce (FICC) Uriel Lynn.

The agreement aims to open permanent dialogue between CGEM and IEBO, which vow to pool their “efforts to create strong synergies between the respective business communities in key sectors,” CGEM explained.

The bodies, representing the two countries’ private sector, will also establish an exchange of information and experience in areas of common interest such as import/export, Research and Development (R&D), innovation and technology.

As part of this strategic partnership, the CGEM and IEBO have set up a bilateral Business Council to promote cooperation between the two private sectors, in particular through the exchange of trade missions, the organization of B2B events and the establishment of Moroccan companies in Israel and Israeli companies in Morocco.

“We are confident that this agreement constitutes a new step towards a strong, lasting partnership that creates synergies between Moroccan and Israeli companies,” said Chakib Alj in a statement to the press on the sidelines of the signing ceremony.

“We are confident that this agreement constitutes a new step towards a strong, lasting partnership and creator of synergies between Moroccan and Israeli companies,” CGEM President Chakib Alj said.

The head of CGEM emphasized that the re-establishment of relations between Morocco and Israel opens very promising economic prospects, including a significant potential in terms of trade, and investment opportunities among others.

Moroccan and Israeli private sectors can benefit from these opportunities at the local, regional or global level, particularly with regard to the comparative advantages which the two countries have in different sectors such as tourism, agribusiness or technology and innovation.

The President of IEBO Ron Tomer also expressed satisfaction with the signing of the partnership and with the renewal of economic and trade relations between Israel and Morocco.

“The roots of many Israelis lie in Morocco, where for many years a large Jewish community flourished,” he said.

“Therefore, it is only natural for us today to renew and strengthen the relationship between our two countries, by creating a real long-term partnership in favor of the promotion of trade cooperation,” he said, describing the agreement as “important” and “historic agreement”.

President of the Federation of Israeli Chambers of Commerce (FICC) Uriel Lynn for his part underlined that Israel and Morocco have “a strong, long-standing relation”, noting that thanks to its geographical location, Morocco could be a bridge for Israeli companies to North Africa.

Morocco offers a competitive import platform for the automotive, agricultural, food, textile and chemical industries, he said, adding that Israel could contribute to the development of Morocco in the fields of modern agriculture, technological equipment, irrigation and water technologies, solar energy and technological cooperation with the EU.

Steve O’Hana, who is chairing the Morocco-Israel Business Council on the Moroccan side, vowed to endeavor to ensure that trade between the two countries is beneficial for both Morocco and Israel.

He said he was confident that “this partnership will be fruitful given the motivations of Moroccan and Israeli operators.”

Morocco and Israel, which re-established ties on December 10, 2020, will soon launch direct flights between Casablanca and Tel Aviv.