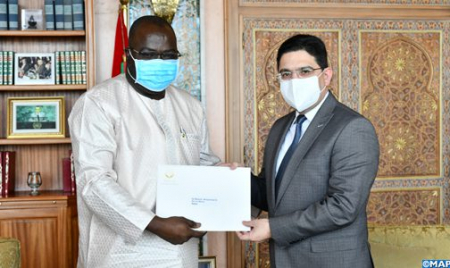 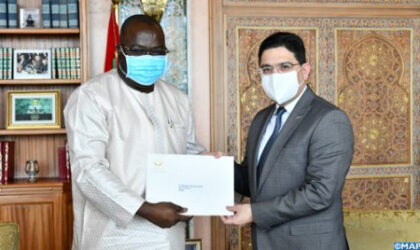 President Alpha Condé of Guinea has sent a message to King Mohammed VI that was handed over by visiting Foreign Minister Ibrahima Khalil Kaba to his Moroccan counterpart Nasser Bourita at a meeting in Rabat Friday.

M. Kaba, who chose Morocco for his first official visit abroad since his appointment as Guinean Foreign Minister, underlined at a press conference following his talks with Bourita, the quality and strength of Moroccan-Guinean relations, which were further strengthened thanks to the exchange of visits of the two countries’ leaders.

“Guineans are aware that Morocco has always been there for us when we go through difficult circumstances”, he said, expressing thanks to King Mohammed VI for the support he provided to Guinea, particularly during the Ebola epidemic, when Morocco was one of the few countries to keep its airlines operational, ensuring thus the delivery of medical and humanitarian aid to Guinea during this period.

For his part, Bourita noted that the visit of the Guinean official to Morocco reflects the special and exceptional nature of relations between the two countries. He said the two royal visits to Guinea in 2014 and 2017 and the six visits of the Guinean president to Morocco have given a new momentum to these relations.

Bourita also expressed his thanks to the Guinean President for his permanent and effective support to Morocco in the Sahara issue, and for his constant solidarity with the Kingdom in the various regional and international bodies.

During their meeting, the two officials discussed regional and international issues, especially the situation in the Sahel and West Africa regions, and agreed to promote coordination on various issues of common interest. They also reviewed the progress made in implementing the various agreements signed by the two countries.

The meeting was also marked by the signing of a Memorandum of Understanding between the Guinean Diplomatic Training Center and the Moroccan Academy of Diplomatic Studies.