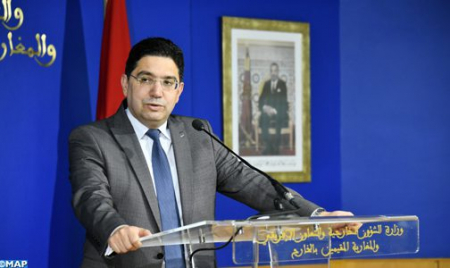 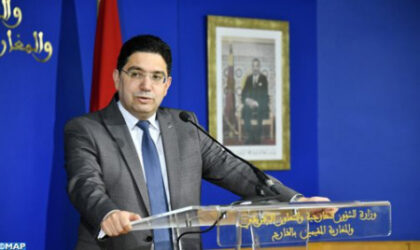 Morocco has declared null and void a statement on the Sahara issue drafted by the Kenyan Presidency of the Peace and Security Council (PSC) of the African Union with an instigation from Algeria, while the chairperson of AU commission Moussa Faki called for putting an end to maneuvers.

Speaking at a press conference in Rabat, Foreign Minister Nasser Bourita said the statement was dictated by Algeria in full violation of the African Union resolutions and procedures.

Since July 2019, the AU, under resolution 639, has considered that the Sahara is an issue that should be tackled within the UN framework only, barring the road to adversaries of Morocco’s territorial integrity within the continental union who sought to create parallel mechanisms.

But the statement that ensued a recent meeting of the PSC has deviated from the AU decision and sought in vain to please Algeria and the Polisario by insisting on an African Union role in resolving the Sahara issue.

The statement has violated Resolution 639 when it recycled old Algerian calls for an involvement of the AU through an envoy and PSC regular meetings on the issue and went further in its immersion in the Sahara issue by calling for opening an AU bureau in Laayoune to monitor the situation there.

“The meeting (of the PSC) was marred by multiple dysfunctions and raises questions, many questions at this context,” said Bourita.

The statement also failed to show that the debate within the council was pouring in favor of supporting the UN role in resolving the Sahara issue.

For Morocco, this meeting is a “non-event”, said Bourita, adding that “this statement is the outcome of maneuvers and dysfunctions.”

After noting that the document was released on March 19, 10 days after the meeting, Bourita said that the majority of the council members have rejected the content of the statement.

The minister recalled resolution 639 stipulating that the Troika which brings together current, outgoing and upcoming presidents of the African Union is the only body entitled to examine the Sahara issue in a way that backs the UN efforts.

The same resolution has the support of African Union member states apart from Algeria and the Polisario and few countries that turn in their orbit who are keen to use the continental organization to serve separatism.

The minister also recalled that the majority of AU member states openly support Morocco’s sovereignty over the Sahara and do not recognize the Algerian-backed Polisario entity.

The Kenyan president, instigated by the PSC commissioner Algeria’s Ismail Chergui, who chaired the PSC has in fact violated AU procedures and bowed to Algerian pressure to unilaterally issue a statement that has been condemned not only by Morocco but by the AU commission as well.

“The maneuvers of Commissioner Chergui who insists on putting us before a fait accompli should stop. I insisted on multiple occasions on the need to let the Troika assume its role and to abstain from inventing mechanisms in every meeting,” Moussa Faki, the chairperson of AU commission said.