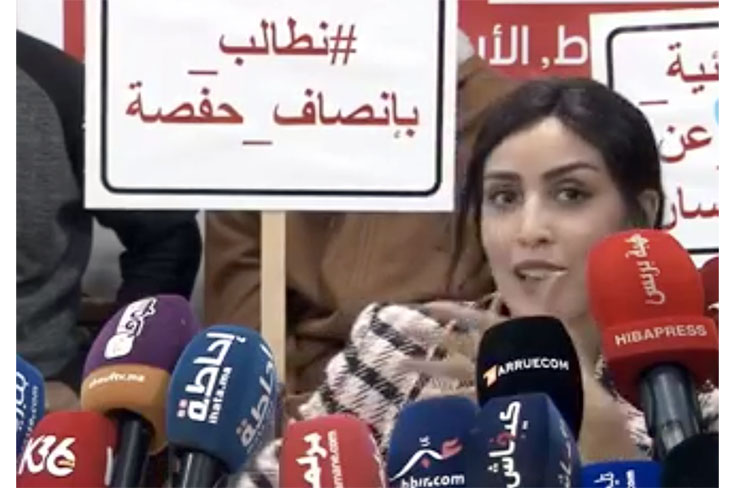 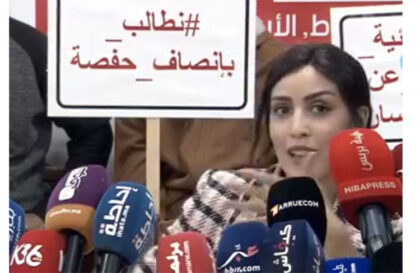 Journalist Hafsa Boutahar, who is suing her colleague Omar Radi for rape, has denounced the partiality and lack of support shown to her by the Moroccan Association of Human Rights, expressing her determination to go “to the end” of the trial.

The journalist, at a press conference in Rabat on Wednesday, March 10, lambasted the Moroccan Association of Human Rights (known by its French acronym AMDH) for its partiality and lack of compassion with the torments she suffered.

“There are certain associations, including AMDH, which claim to defend human rights but in reality, they defend all that is political, completely abandoning my case, that of a woman who has suffered the pangs of rape”, said Hafsa Boutahar during the press conference held at the headquarters of the National Union of the Moroccan Press (SNPM), in Rabat, in the presence of many journalists.

Hafsa Boutahar emphasized that she decided to hold the press conference to encourage women and support them in their fight for justice, freedom, and institutional protection from all kinds of violence.

“I will fight to the end because I am the victim of a rape that the law punishes”, she said, but declined to say anything else about her judicial file, so as not to violate the secrecy of the ongoing investigation on the rape case.

Boutahar argued that slogans, values, and vows promoted by some NGOs are “nothing but hollow words that are easily forgotten.” She insisted that she felt “unprotected” by those parties, who claim to defend rights, when she reached out for help.

“On what basis are associations created? On principles and fundamentals linked to the defense of victims, including women? I unfortunately note that some were created on the basis of hidden agendas that we do not know,” she added.

“There are associations like AMDH which did not support me. These associations choose their victims. Nobody can speak on my behalf, because I am the victim,” she stated further.

For Hafsa Boutahar, these “parties”, clearly alluding to the AMDH, act within the framework of “settling of scores by instrumentalizing this file for political ends.”

Several people standing behind her were brandishing banderoles with slogans in Arabic calling for justice to be done, and denouncing selectivity in the defense of human rights.

Actually, AMDH had adopted a biased position in support of Omar Radi when he was arrested in July 2020 on charges of rape, espionage, “receiving foreign funding” and “attacking the internal security of the State.” The NGO had demanded his immediate release in total disregard for the independence of the judiciary and the right of Hafsa Boutahar to a fair trial.

This is not the first time that the AMDH is criticized for the accumulation of ethical practices and the conflation of far-left political agendas with human rights and for flouting Hafsa Boutahar’s rights.

Last October, some 17 members of the AMDH’s administrative board deplored that the association failed to uphold its human rights mission when it flouted the rights of Hafsa Boutahar who came to the association seeking support, but her version ended up being communicated to Radi to help him prepare his defense much ahead.

The 17 members threatened to leave the NGO citing undemocratic and unethical practices by activists from Anahj, a far-left small party with no weight in the Moroccan political scene but whose members dominate the AMDH.

The angry members expressed their rejection of the hidden agenda motivating the AMDH, mentioning in particular how Anahj activists throw the NGO into the trap of instigating protests, acting hand in hand with outlawed Islamic group Al Adl Wal Ihssane in Jerada in 2018.

The AMDH’s senior leaders have also shown their politically-motivated agenda behind a human rights veil by declining to show support to a young man who alleged to be raped by a critical journalist at Akhbar Al yaoum.