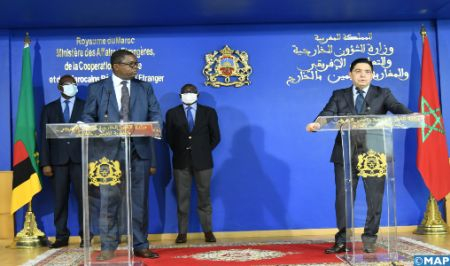 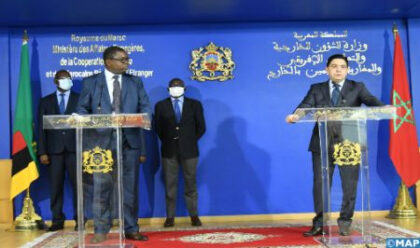 Zambia has installation on Friday Kelvin Malisase as its Consul in Laayoune, dismissing thus the allegations relayed by the Algerian media claiming that the Zambian consulate in Laayoune would be closed.

Zambian Foreign Minister Joseph Malanji, who is on a working visit to Morocco, confirmed Friday the opening of a Zambian embassy in Rabat and a consulate in Laâyoune, in the Moroccan Sahara.

Rejecting the allegations relayed by Algerian media about the Zambian consulate in Laayoune, he stressed that Zambia is a “sovereign state” which communicates through official and government channels and does not react to allegations relayed via social networks.

“The inauguration of the Embassy of Zambia on October 24, 2020, our Independence Day, is a clear indication of the trajectory of our relations,” said the Zambian foreign minister, noting that this representation will focus on the development of economic cooperation between the two countries.

He also welcomed Morocco’s initiative to grant scholarships to more than 300 Zambian students, who are studying in various higher education institutions in the Kingdom.

Nasser Bourita, for his part, commended Zambia’s “constant” and “positive” position on the Sahara issue. “We often discuss our bilateral relations and regional issues, especially within the African continent and within the framework of the African Union,” said Bourita.

This work is done within the framework of the roadmap, put in place during the visit of King Mohammed VI to Lusaka in 2017, and during which many agreements were signed and a vision for bilateral cooperation was laid down, explained the Minister.

Talks between Bourita and Malanji took place in the presence of the chargé d’affaires of Zambia, Eliphas Chinyonga, and the Zambian Consul in Laayoune, Kelvin Malisase, who were installed in their new missions by the Foreign Minister.

North Africa Post's news desk is composed of journalists and editors, who are constantly working to provide new and accurate stories to NAP readers.
NEWER POSTLaunch of extension works of Nouaceur Aeronautics and Airport Logistics Institute
OLDER POSTAn Algerian dies by setting fire to himself in Western Algeria