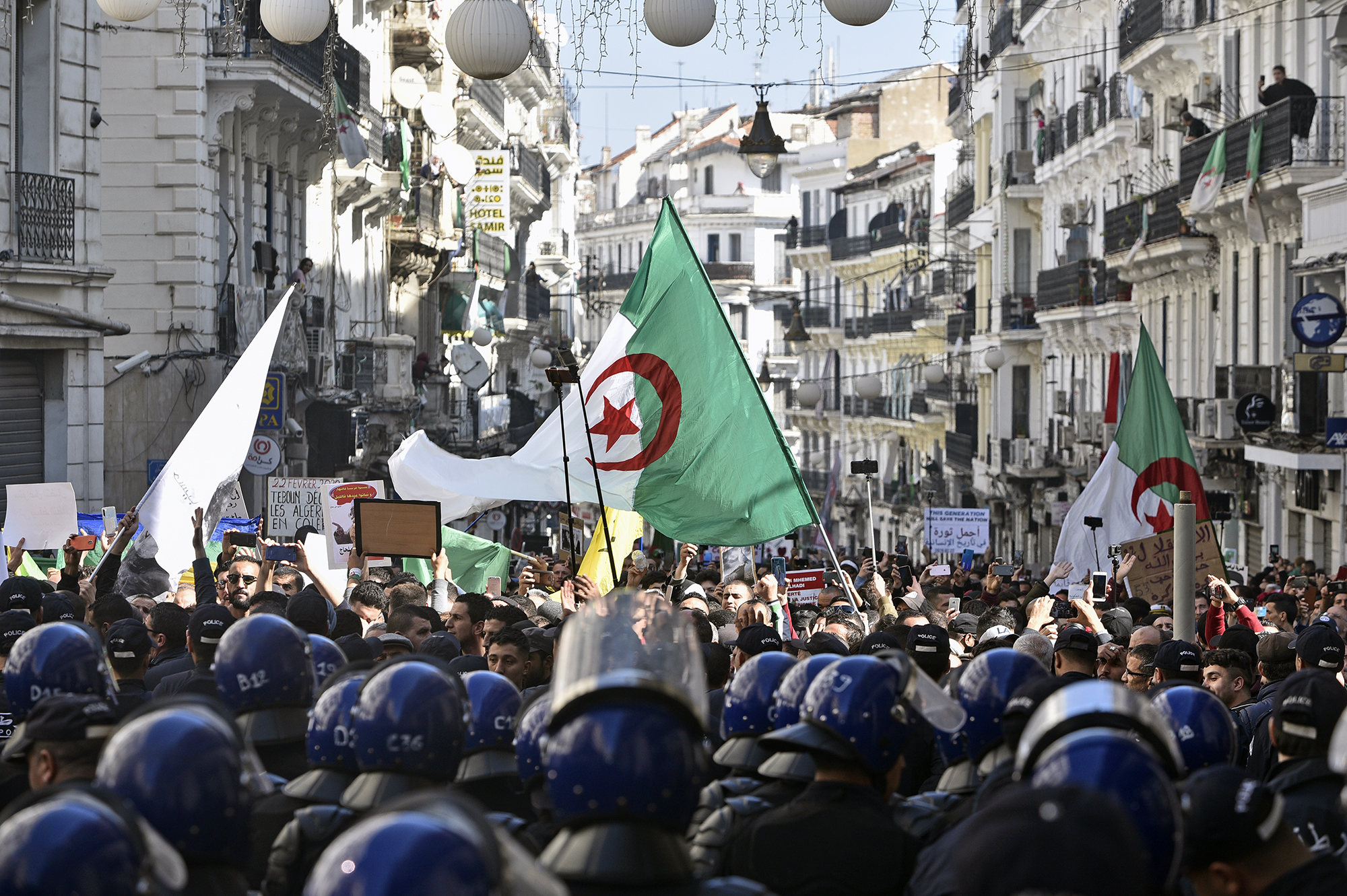 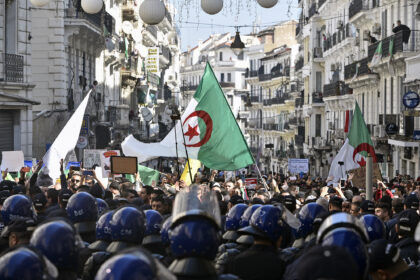 Algerian riot police block the progress of an anti-government demonstration heading towards the presidential palace in the capital Algiers, on February 22, 2020. – Several thousand people gathered in the Algerian capital on the first anniversary of a protest movement that seeks an overhaul of the political system and forced the former president to resign. (Photo by RYAD KRAMDI / AFP)

There is no better comparison for the situation within the Algerian regime than the scene from the Titanic movie showing a music band that plays while the ship was sinking.

After a nearly three-month long absence from the country, President Tebboune returned to announce cosmetic reforms including parliament dissolution and called early elections as well as a government reshuffle in a bid to stem a youthful pro-democracy movement that demands a clean break with the military regime in place.

In his televised speech on Feb 18, the Algerian president was supposed to reassure a disenchanted population facing bleak prospects of high inflation, unemployment and autocracy but none of that happened. The President seemed to be more concerned about Algeria’s support for the Polisario.

In a statement that reflects Algeria’s increasing diplomatic isolation and its inaudible voice, Tebboune raised the Sahara issue stressing the need for what he called self-determination of the Sahraoui people and described the Moroccan territory as the last colony in Africa.

As Algerian President and Algeria’s inaudible diplomacy keep rehashing same old cold-war propaganda, the UN and international powers as well as an increasing number of African states have all recognized the unfeasibility of the referendum option and encourage the parties, including Algeria, to negotiate in favor of a win-win political solution, which Morocco says can only be materialized through its autonomy proposal.

During Tebboune’s absence, diplomatic landslides have taken place in the region that are milestones for Morocco and setbacks for Algeria and its puppet the Polisario.

Chief among these developments we can cite Morocco’s clearance of the border crossing with Mauritania once and for all and the US recognition of Morocco’s sovereignty over the Sahara.

These have sent shockwaves within the military regime that failed to externalize its domestic crisis. The military regime used its media mouthpieces to attack Morocco and depict it as the enemy at the gate. But none of these attempts succeeded to distract attention from the inevitable social and economic crisis whose omens are appearing and auguring ill for the Algerian people.

The celebration of the second Hirak anniversary in Kherrata last Tuesday Feb.16 and in Khenchela last Friday Feb.19 was a proof that showed to the regime that its desperate tactics to pin its crisis on Morocco has failed. Demands for genuine democratic and economic reforms will further escalate as calls for protests multiply across a country beset with a leadership lacking vision.

The Algerian regime and its pro-separatism diplomacy is pegged on the price of the barrel. The country has squandered its oil wealth and economists doubt Algeria will be capable of exporting oil in the next decade leaving the country prey to dependence on a single resource.

The real threat for Algeria as a state emanates from its corrupt military leadership which has been ruling the country behind a civilian curtain. The voice of the masses has been made clear through the first Hirak protests in 2019 which succeeded in averting a fifth term by Bouteflika but failed to uproot an aged military elite that has wasted Algeria’s oil and gas wealth, kept the Maghreb integration in limbo and created conditions propitious for cross border crime, trafficking and terrorism through its support for armed groups such as the Polisario.

North Africa Post's news desk is composed of journalists and editors, who are constantly working to provide new and accurate stories to NAP readers.
NEWER POSTThe underhand repression of the Algerian regime unveiled by a European diplomat
OLDER POSTMorocco shines in the sky of renewable energy – UN & international media say