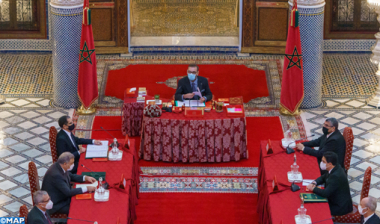 A Council of Ministers that was held in Fez Thursday under the chairmanship of King Mohammed VI approved the draft framework law on social protection for all.

The draft law was approved as part of the implementation of the King’s guidelines, as expounded in the Throne Day speech in July, and in the speech delivered by the Sovereign at the opening of the Parliament fall session in October.

The draft relates to the generalization of social protection for the benefit of all Moroccans, said a statement by spokesperson for the Royal Palace, Abdelhak El Mrini.

This societal project, keenly followed up by the King, represents a genuine social revolution given its direct and concrete impact on the improvement of the living conditions of citizens, the preservation of the dignity of all Moroccans and the protection of vulnerable categories, particularly in times of economic turbulence, health risks and various emergencies, the statement said.

This framework bill is intended to be the cornerstone and the referential framework for the implementation of the royal vision in the field of social protection, the realization of the noble objectives set out by the King, in particular the support of the purchasing power of Moroccan households and the achievement of social justice, the statement underlined, explaining that the project aims to define the principles and objectives relating to the reform of the social protection system, over the next five years, and the commitments of the State, local authorities, public establishments and enterprises, as well as the private sector, civil society, various public and private bodies and citizens to achieve the project objectives.

The implementation of this large-scale societal project embodies the fulfilment of the King’s aspirations for the Moroccan society’s wellbeing, through the generalization of social protection, and represents, moreover, a lever for integrating the informal sector into the national economic fabric, so as to guarantee the protection of the working class and its rights, as well as a decisive turning point on the path to achieving a balanced development and social and spatial justice, the statement said.

North Africa Post's news desk is composed of journalists and editors, who are constantly working to provide new and accurate stories to NAP readers.
NEWER POSTFrench MP calls France to be part of dynamic prompted by US recognition of Moroccanness of Sahara
OLDER POSTMorocco to roll out coronavirus vaccine for people aged over 65