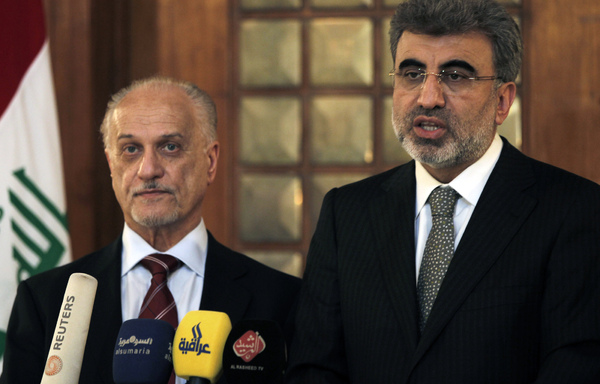 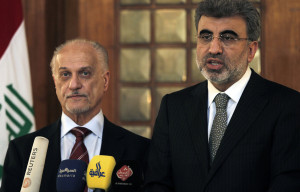 A Turkish delegation headed by its Energy Minister Taner Yildiz met with Iraq’s Deputy Prime Minister for Energy, Hussain al-Shahristani, in the Iraqi capital to foster bilateral relations which were affected by a deal between Ankarra and the regional autonomous Iraqi Kurdish region. Baghdad has always maintained that all oil deals should be approved by the Federal government. Turkey decided to seal an oil agreement with the Kurds and now wants to include the Federal government to it.
Reports have claimed that a multi-billion-dollar energy package was signed without the participation of Baghdad. Turkish Energy Minister said they “stand by the agreement” concluded last week and hopes that he will be able to draw in Baghdad to make it “a three-way mechanism”.
Iraq has warned that the exportation of oil outside its borders will be illegal while Turkey said it is treating the matter in “a careful and courteous way”.
This isn’t the first time that the federal government is having issues with the Kurds. In the beginning of the year, they decided to determine how much they will give the central government from the revenue generated from the oil in the region. The Kurdish north of Iraq has enjoyed autonomy since the 1990-1991 Gulf War when a U.S.-led coalition drove Iraqi occupying troops out of Kuwait.
Minister Yildiz said “the finalization” of the deal will bring together parties involved pointing out the importance of the consent of Baghdad. He said the deal will make the Kurdish region a net contributor to the Iraqi national income. Kurdish authorities have recently built its own pipeline to export crude to Turkey. Baghdad fears that economic independence could empower the region’s desire to become an independent state.

North Africa Post's news desk is composed of journalists and editors, who are constantly working to provide new and accurate stories to NAP readers.
NEWER POSTMaghreb Still Facing Threat of Mali Conflict Spillover
OLDER POSTInternational Organization for Migration (IOM) has set up an information website for migrants in Egypt