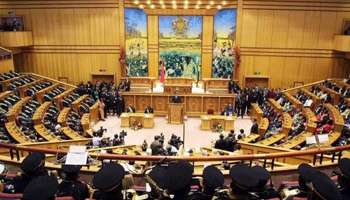 The Gabonese parliament, meeting in congress, adopted the new Constitution by an overwhelming majority. Out of 229 voters, 204 voted in favor, 25 against. There were no abstentions. The revision was initiated by President Ali Bongo.

The objective is to fill legal gaps, the government argues. This is a step backwards for democracy, denounce minority opposition members in both houses of Parliament.

The text passed through both houses of Parliament like a letter in the post. On 15 December, the deputies adopted the draft without changing a comma. The same happened on Monday 28 December for the senators. The meeting Tuesday of the two chambers of Parliament in congress was a mere formality.

Among the revised provisions that are causing ink and spit to flow is Article 13 on the interim of the President of the Republic in the event of a vacancy in power.

The new constitution incorporates the concept of “temporary unavailability” first mentioned two years ago, when President Ali Bongo suffered a stroke. The Constitutional Court had not declared the vacancy of power then.

The opposition had denounced a subtle revision of the constitution. With the new text, the head of state will also be able to appoint some of the senators, whereas before they were all elected.