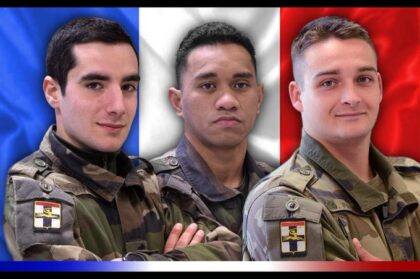 Three French soldiers of the Barkhane force were killed in operation in Mali on Monday when their armored vehicle was hit by an explosive device in the region of Hombori, the French presidency announced.

Three French soldiers of the 1st regiment of chasseurs of Thierville-sur-Meuse lost their lives on Monday December 28. Their armoured vehicle was hit this morning by an improvised explosive device while they were taking part in an escort mission between Hombori and Gossi, in the Gourma desert, in the center-east near the Burkinabe border.

Hombori is a strategic place, as it is crossed by a major national road 16, linking Kona in the centre and Gao in the far east, where an armed terrorist group called RVIM (Rally for the Victory of Islam and Muslims) is active.

According to the chief of staff of the French armed forces, Barkhane’s forces were immediately deployed on the ground and in the air to secure the area.

According to the Ministry of Armies, the soldiers were operating in an area where terrorist groups were attacking civilian populations and threatening regional stability. In its statement, the French Presidency underlined France’s determination to continue the fight against terrorism.

The French and Malian armies had recently set up a month-long cooperation mission in the area in order to increase their interoperability, i.e. their ability to act and protect civilian populations together. A Barkhane official had explained that the main threat to the military was IEDs (Improvised Explosive Devices), which is exactly what cost the lives of these three soldiers.