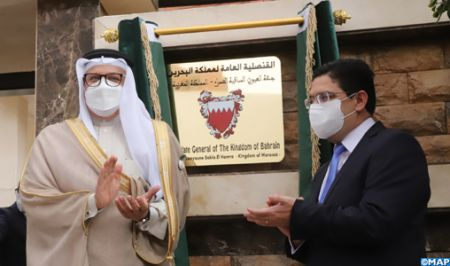 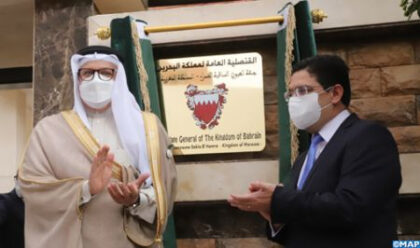 The opening on Monday of a consulate general of the Kingdom of Bahrain in Laayoune, capital of the Moroccan Sahara, constitutes “a historic step” in the longstanding relations between the two countries, said Bahraini Foreign Minister Abdullatif bin Rashid Al Zayani.

“The opening of the consulate general is a historic step which confirms Bahrain’s full support and solidarity with Morocco in its historical and legitimate rights over its Sahara”, said Al Zayani during a joint press briefing with his Moroccan peer Nasser Bourita, held at the end of the inauguration of this diplomatic representation.

The Bahraini top diplomat indicated that the two countries are reaching today “an additional milestone in the building of their fraternal, friendly and solidarity-based relations”, recalling that his country “has been and will always remain by the side of Morocco” in the defense of its territorial integrity and its sovereignty over the whole of its territory.

He also lauded the excellent bilateral ties, which constitute a model of relations between two brotherly states, expressing his country’s desire to further strengthen the multidimensional cooperation with Morocco, in accordance with the directives of the Bahraini Sovereign.

In addition, he noted, King Hamad Bin Isa Al Khalifa welcomes the recognition by the United States of the full sovereignty of Morocco over the whole of its Sahara and the forthcoming opening of a US consulate general in Dakhla. He described as a “historic step” this decision that would further promote the strategic partnership between the Kingdom and the United States of America.

He also highlighted the constant position of Bahrain and Morocco in support of the Palestinian question, recalling that the two countries support the legitimate rights of the Palestinian people to an independent state with Al-Quds Al-sharif as its capital, in the framework of international law, the Arab Peace Initiative and the two-state solution.

Bourita on his part said the opening of Bahrain’s consulate general in Laayoune is an undeniable proof of the solidarity existing between the two countries.

This very strong diplomatic act is part of the constant support of this Gulf country for the defense of Morocco’s territorial integrity, and for the preservation of its unity, stability and security, he noted adding that Morocco has never failed, for its part, to support the stability and security of Bahrain, particularly in the face of Iranian interventions.

From Manama, Vice-president of the Shura Council Jamal Mohamed Fakhrou said the opening of a Bahraini consulate in Laayoune is a clear illustration of Bahrain’s unwavering and unconditional support for Morocco’s territorial integrity.

Bahrain remembers Rabat’s support for Manama in all areas and issues, he said, affirming that despite the distance separating them, the two Kingdoms form one people and one country, and they have the same aspirations and face the same challenges.

The opening of a Bahraini consulate in Laâyoune is only an embodiment of Manama’s steadfast position vis-à-vis the territorial integrity of Morocco, he said, assuring that Bahrain supports all the legitimate actions taken by Morocco to defend its territories.

The Consulate General of Bahrain is the 10th diplomatic representation opened in the capital of the Moroccan Sahara in a year.

Bahrain has thus followed in the footsteps of the Union of the Comoros, Gabon, the Central African Republic, Sao Tome and Principe, Burundi, Côte d’Ivoire, Eswatini, Zambia and United Arab Emirates.