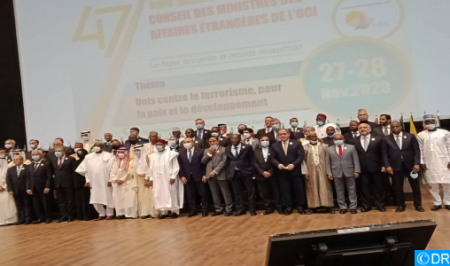 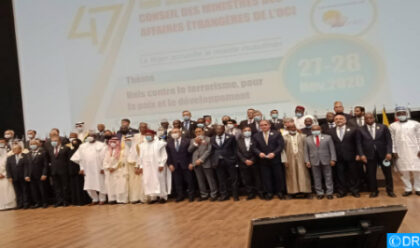 Morocco reaffirmed, Friday in Niamey, its unwavering support to the peace process as a strategic choice for the settlement of the Palestinian-Israeli conflict.

Morocco reaffirms its unwavering position supporting the peace process as a strategic choice to achieve a just, lasting and comprehensive settlement of the Palestinian-Israeli conflict on the basis of the two-state solution and so as to allow the brotherly Palestinian people to recover their legitimate rights and to establish their independent, viable and sovereign State, with Al Quds East as its capital.

The remarks were made by Moroccan Junior Foreign Minister Nezha El Ouafi, before the 47th session of the Foreign Ministers’ council of the Organization of Islamic Cooperation (OIC).

Morocco, whose Sovereign King Mohammed VI chairs the Al-Quds Committee, considers it imperative to preserve the status quo of Al-Quds so that the holy city remains a land of encounter and dialogue, a symbol of peaceful cohabitation between the faithful of the three monotheistic religions and a center of values of mutual respect, she said.

The Kingdom, she pointed out, also reiterates its attachment to international legality and its rejection of the policy of annexation and any unilateral measure in occupied Palestinian territories, which are contrary to international law and the UN related-resolutions.

Referring to the theme of this 47th session, namely “United against Terrorism for Peace and Development”, the Moroccan official affirmed that the Kingdom categorically rejects any attempt, whatever its origin, to associate terrorism with a religion, race, culture, community or ethnic group.

Morocco reiterates its absolute and unreserved condemnation of all forms of terrorism and the instrumentalization of religion for terrorist purposes, she added.

The fight against terrorism, a universal and cross-border phenomenon without any connection to a particular religion or civilization, requires a comprehensive approach and international cooperation and solidarity at all levels, in a way that provides for effective responses to these threats, El Ouafi said, making it clear that Morocco denounces the provocations that threaten the sacredness of the Muslim religion.

The two-day session of the OIC ministerial council is debating, in addition to the Palestinian cause, the fight against violence, extremism and terrorism and Islamophobia. The situation of Muslim minorities and communities in non-member states as well as the promotion of dialogue among civilizations, cultures and religions, are among the topics on the agenda.

The OIC foreign ministers will also discuss political, humanitarian, economic, social and cultural and other issues related to science and technology, the media and the progress made in the implementation of the “OIC-2025: Plan of Action” document.