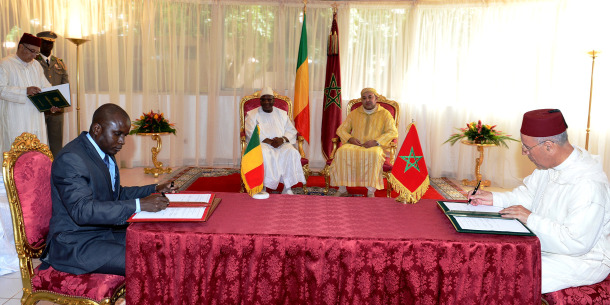 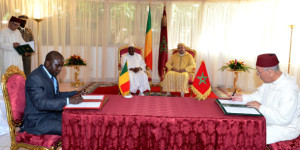 Morocco has renewed determination to foster cooperation and partnership with African countries and to help fulfill the aspirations of African peoples to development and stability.
“Out of faithfulness to its African belonging, Morocco has sought since independence to promote a fruitful cooperation and active solidarity with those (African) countries, and to contribute to the fulfilment of the expectations of their peoples who aspire to development and stability,” said the King of Morocco in a speech delivered on Wednesday.
Morocco tirelessly endeavors to strengthen and diversify its economic relations with the countries of the continent and to encourage investments, at the bilateral level and at the level of regional bodies and groupings as well, the King said. He added that his country also works, at the regional and international levels, to uphold the continent’s causes, including those related to development.
The King urged his government to upgrade coordination and cooperation with African “sisterly countries” in various areas and to favor the conclusion of free trade agreements in the prospect of achieving regional economic integration.
Morocco, a founding member of the Organization of African Unity, has left the African Union because of the presence of the Sahrawi Republic (SADR), but it has never stopped its cooperation with African countries and the king conducted several African tours since he came to power in 1999. Last September, Mohammed VI visited Bamako to attend the inauguration of the new President of Mali, Ibrahim Boubacar Keita. Touching on peace and security issue, Mohammed VI recalled that his country has never spared any effort to promote peace and stability throughout the continent, to seek peaceful settlements to regional conflicts and to participate in peace keeping operations wherever its presence is needed.
Regarding the situation in the Sahel-Sahara area, he said Morocco has repeatedly reaffirmed the pressing need to address the security threats hovering on the region which has become a hotbed for extremist and terrorist groups, and for drug, human and arm trafficking, with all the disastrous consequences such groups and traffickers have on the whole region’s development and stability.
As an evidence of Morocco’s “sincere commitment to the cause of peace and rule of the law”, the King recalled his country’s support to Mali “in its fight against extremism and terrorism.”
A regional conference on “border security between the countries of the Sahel and the Maghreb” is to be held in Rabat next week. Also, Morocco is to host in 2014 the summit meeting of the Community of Sahel-Saharan States (CEN-SAD). The kingdom attended the first ministerial meeting of the UN integrated strategy for the Sahel held last Tuesday in Bamako.
Morocco has repeatedly stressed the need to set up a mechanism involving the countries of the Sahel-Sahara region to strengthen interregional cooperation between the countries of the Sahel, West Africa and the Maghreb.
The Sahel continues to face a common set of growing, complex, cross-border and inter-related security, development, human rights and humanitarian challenges.
The activities of the terrorist groups in the region, affiliated to Al Qaeda, combined with transnational organized criminal networks involved in drug trafficking, human trafficking, arms smugglings, as well as, the presence of armed rebel groups and separatist movements are some of the most pressing challenges for “Sahelian States” as well as for the Maghreb and West African regions.
The countries of the Sahel, with an 80 million strong population, are also affected by structural food security and nutrition problems that provoke large-scale humanitarian crises, fragile economies and high population growth.
In his speech, the king of Morocco also touched on the issue of immigration, his country having become a host country for immigrants both from Africa and from Europe. He urged his government “to elaborate a new comprehensive policy on immigration and asylum issues, pursuant to a humanitarian approach in conformity with our country’s international commitments and respectful of immigrants’ rights.”
Morocco has submitted, on the sidelines of the UN General Assembly, “the African alliance for migration and development initiative.” This initiative, based on a shared African vision and humanitarian principles and on shared responsibility between countries of origin and of transit and host countries, is meant to govern migration matters.
Because of the close link between immigration and development and because migration issues concern all states and peoples, the King of Morocco urged the international community to get involved in this issue to avert humanitarian catastrophes like the recent tragedy that happened off the Italian island of Lampedusa.

North Africa Post's news desk is composed of journalists and editors, who are constantly working to provide new and accurate stories to NAP readers.
NEWER POSTHow to Attract FDI to Maghreb: Casablanca Financial City a la ‘Shenzhen’
OLDER POSTLibya – a Tourist Hotspot in the Making?