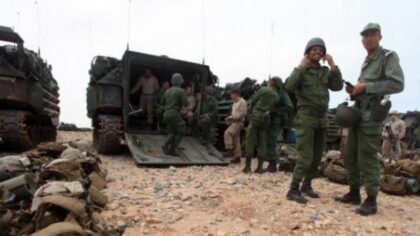 The blocking of the Guerguarat crossing point by the Polisario militias, the destruction of the road connecting the Moroccan and Mauritanian border posts, and the provocations against members of the Royal Armed Forces are a serious violation of the last five resolutions of the UN Security Council.

A diplomatic source that closely follows the latest developments at Guerguarat said these provocative acts, as well as the intimidation of MINURSO personnel, in particular by throwing stones at a helicopter which was flying over the area, seriously endanger the sustainability of the ceasefire and violate the last five Security Council resolutions, which urged the Algeria-backed Polisario to respect the ceasefire and refrain from any act which may destabilize the situation or compromise the resumption of the political process.

Since Resolution 2414 adopted in 2018, the UN successive resolutions have also called on the separatists to immediately withdraw from the buffer zone of Guerguarat, the source recalled, making it clear that Morocco will not accept a change in the status quo of the area “east and south of the defense system, which is an integral part of Moroccan territory.”

The Polisario’s provocative acts and escalation are all acts of open mistrust against the UN Secretary-General, who has called on three occasions for the preservation of the freedom of civilian and commercial movement in the buffer zone, the diplomatic source noted, adding that the polisario does not hide its desire to torpedo international legality, through its calls for war and its open disdain for the UN Secretary General and MINURSO.

Morocco has so far shown the greatest restraint and wisdom in the face of this extremely serious situation, where an armed separatist group is engaged in acts of banditry in an area of the Moroccan national territory that is placed under the responsibility of the UN, the source underlined.

Morocco’s restraint was welcomed by the members of the Security Council when debating resolution 2548, adopted on October 31. This resolution calls, for the fifth time, on the “Polisario” to refrain from any act of destabilization in the area located at the east and south of the Moroccan defense system.

However, “Morocco will not accept a change in the status of the area, which is an integral part of Moroccan territory,” the source pointed out.

The Kingdom of Morocco draws the international community’s attention to the responsibility of the polisario, supported by Algeria, which created it and which continues to arm and finance it, the source concluded.

Morocco has so far shown a great deal of restraint and wisdom in the face of the desperate provocations of the Polisario.

However, in a speech on the occasion of the Green March anniversary, King Mohammed VI strongly rejected any attempts to obstruct the free flow of traffic in the area and reiterated Morocco’s preparedness to defend its territories.