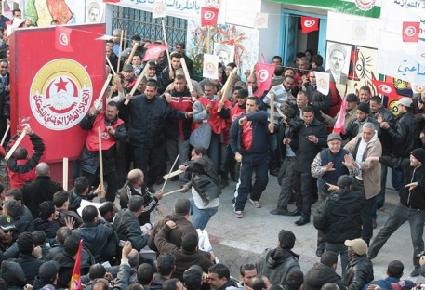 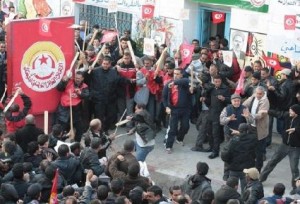 The UGTT (Union Générale Tunisienne du Travail) union federation – which represents hundreds of thousands of Tunisian workers – mediating Tunisia’s political crisis announced Tuesday that it would “suspend the national dialogue” on choosing a new prime minister after political leaders again failed to agree on a candidate. The political tensions and economic instability that have plagued Tunisia since the country’s former strongman Ben Ali was toppled in a 2011 Arab Spring uprising were heightened earlier this year by the murders of opposition politician Chokri Belaid in February and MP Mohamed Brahmi in July.

After months of political stallmate, Ennahda opened talks with the opposition and the country’s prime minister announced he would step down as long as the transition timetable agreed in early October is respected. However, the ruling coalition has now been accused to have “made the dialogue fail” and according to a representative of the opposition National Salvation Front coalition, “[they] are looking for any means to stay in power.”

As UGTT leader Houcine Abassi explained earlier this week, “[we] have decided to suspend the national dialogue until there are favourable grounds for talks to succeed. We didn’t reach a consensus on the person who will lead the government.” Although the UGTT tried to resolve the differences, there were unable to reach a consensus. The opposition has demanded the current government’s immediate resignation and the formation of a cabinet of independents, while accusing the current line-up of failing to rein in jihadists.

The government and the opposition agree that Islamist radicals, who were suppressed under Ben Ali but whose influence has grown since his ouster, are to blame for recent violence. The government has also acknowledged the existing links between Tunisia’s jihadists and al Qaeda in the Islamic Maghreb (AQIM) while also admitting that it lacks the resources needed to combat them. On Sunday, the government ordered an eight-month extension of a state of emergency, which has been repeatedly renewed.

North Africa Post's news desk is composed of journalists and editors, who are constantly working to provide new and accurate stories to NAP readers.
NEWER POSTLibya warns oil companies dealing with militias
OLDER POSTHuman Rights: Morocco does not need to take any lessons from anybody (King)