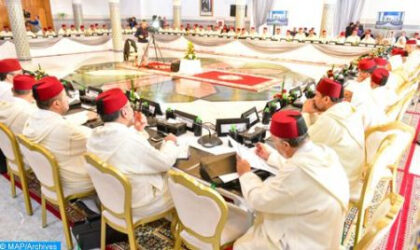 Morocco’s Higher council of Muslim Scholars strongly denounced any attempt at offending the sacredness of the Muslim religion, after a campaign was launched in France to publish cartoons attacking the Prophet, triggering resentment across the Muslim World.

In a statement, the council said in no way can the freedom of speech justify offense.

It stressed that such acts of provocation derail from the teachings of all the prophets, including Prophet Muhammed, notably the values of love, brotherhood and solidarity between people to all humanity

On Sunday, Moroccan foreign ministry called a halt to “stoking resentment” through offensive and injurious cartoons.

It condemned the continuing publication of these cartoons, saying that they reflect the “immaturity of their perpetrators”.

“Freedom of expression cannot, for any reason, justify the insulting provocation and the offense of the Muslim religion, which has more than two billion followers across the world. As much as it condemns all obscurantist and barbaric violence allegedly perpetrated in the name of Islam, the Kingdom of Morocco stands up against these abusive provocations of the sacredness of the Muslim religion,” the foreign ministry said.

French President Emmanuel Macron refused to condemn the publication of the offensive cartoons evoking the freedom to practice blasphemy.

Meanwhile, French firms are facing a tough test in a number of Muslim countries where calls for boycotting French brands surged in reaction to the continuing publication of the Prophet’s drawing.

The French government called for these campaigns to stop immediately in a statement that further angered boycott advocates because of its patronizing tone.

The publication of the cartoons on a large scale in France came after a French philosophy teacher shared these images with his students at a class on the freedom of speech. The Professor was later beheaded by an islamist radical of Chechen origins.

French brands were hit by a boycott campaign notably in Morocco and Algeria in 2018.