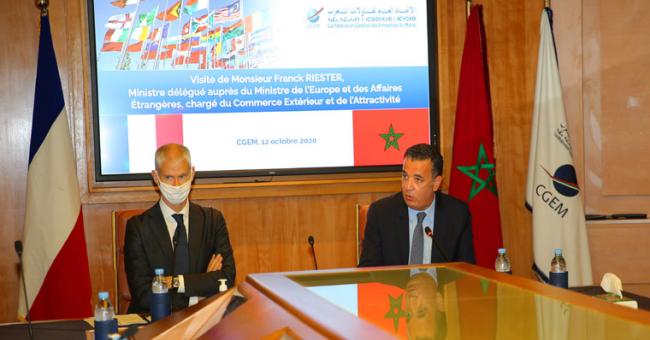 France eager to bolster its partnership with Morocco 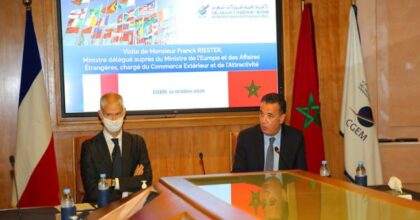 The French Minister for Foreign Trade and Attractiveness reiterated from Casablanca France’s strong desire to raise its economic relations with Morocco to an even higher level and to exploit the many existing opportunities.

“Despite the health crisis and travel difficulties, my presence here shows how much the French government wishes to consolidate and increase its partnership with Morocco,” said in Casablanca, Monday, Franck Riester, French Minister for Foreign Trade and Attractiveness, who has chosen Morocco for his first trip outside the European Union (EU) since his appointment last July to the government headed by Jean Castex.

Riester reiterated, before the media, the French government’s eagerness to boost trade between the two countries, and ensure that more French companies settle and develop in Morocco, and more Moroccan companies and investors operate in France.

During a meeting with the union of Moroccan employers, the CGEM, Riester expressed hope that the France-Morocco partnership would cover, beyond the traditional areas, the sectors of the future.

Frank Riester who described the partnership between the two countries as “exceptional” in sectors such as aeronautics, automotive, rail, and agrifood, said the two countries are now working to establish partnerships in sectors of the future, such as sustainable cities, water, sanitation, digital networks, new technologies, renewable energies, or the very promising sector of hydrogen.

France also wishes to develop partnerships with Morocco in Africa, building on the Kingdom’s privileged position as a hub for the continent.

“We want to build partnerships for the future and joint investments, here in Morocco, but also on the African continent, Morocco being the privileged link geographically, culturally and historically between Europe and Africa,” underlined the French official.

Franck Riester’s visit to Morocco falls precisely within this framework. “Beyond the ambition and the vision that we can have, we must work concretely to implement these partnerships,” he explained.

To a question on the French government’s intentions to relocate certain industries, an issue that raised tensions lately between the two countries, Franck Riester said reassuringly that France is not turning inward, nor discarding all the partnerships it can have, especially with Morocco. “On the contrary! ”He affirmed.

The minister explained that because of the health crisis, France had to face a supply disruption of a number of products, and it was essential to ensure that it was less dependent on distant countries such as China.

“This requires a diversification of supplies, but also by the co-location of a certain number of value chains to countries located near the European Union, and in particular Morocco”, he said. “This is a huge opportunity for Morocco”.

Franck Riester will end his two-day visit to Morocco this Tuesday with a working meeting with Moulay Hafid Elalamy, Minister of Trade, Industry, and Green and Digital Economy.

At his meeting with the media, Franck Riester announced that French Foreign Minister Jean-Yves Le Drian will visit Morocco shortly, without disclosing the date of the visit.

However, news website Le360 noted that Le Drian’s visit will probably take place after October 15, the date planned for a trip to the kingdom by French interior Minister Gerald Darmanin.

President Emmanuel Macron was expected in Rabat in February this year but the visit has been called off because of the current global pandemic.

France is Morocco’s second commercial partner and ranked first foreign direct investor in the Kingdom over the past 15 years. Nearly a thousand French companies operate in the Kingdom employing nearly 100,000 people.