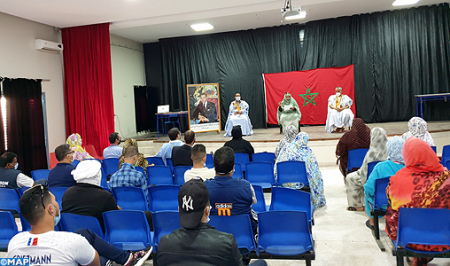 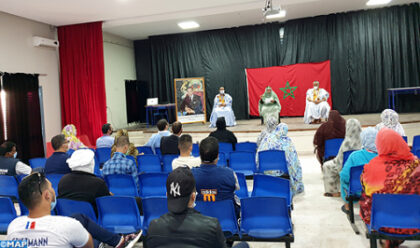 The sheikhs and notables of the Sahrawi tribes of the Dakhla-Oued Eddahab region have denounced the desperate provocations made recently by the enemies of the territorial integrity of Morocco.

At a meeting held Sunday in Dakhla, the Sahrawi notables rebuked the provocative and hostile move made lately by Amanitou Haidar seeking to set up a pro-Polisario entity in the Moroccan Sahara.

The desperate maneuvers by the polisario aim to jeopardize the stability and the dynamic of development that the region is experiencing, the Sahrawi tribes’ elders said, in a press release read out at the end their meeting, strongly condemning the desperate maneuvers of the Polisario to undermine this stability and development by attempting to obstruct civilian and commercial traffic and freedom of movement at the El Guerguerat post-border.

The purpose of these maneuvers is to undermine the Kingdom’s strategic interests with the countries of sub-Saharan Africa, they added.

“Moroccans from Tangier to Lagouira as well as the international community have become accustomed to this kind of provocative acts, which are repeated each time the maneuvers, allegations and lies of the separatists and their supporters, in the eastern neighboring country, are exposed and refuted”, noted the sheikhs and notables of Dakhla-Oued Eddahab region.

The announcement of the creation of a fake entity in the Moroccan Sahara represents an act of provocation, which attests to the weak and false allegations spread by the Polisario and its sponsor, Algeria, concerning the territorial integrity of the Kingdom, they said.

On this occasion, they reaffirmed the unwavering attachment of the sons, elected officials, sheikhs and notables of the Sahara to their historical affiliation to Morocco and to the allegiance to the Alaouite throne and to King Mohammed VI, commander of the faithful.

Based on their strong conviction of the just national cause, the Elders of the Sahrawi tribes of Dakhla-Oued Eddahab reiterated their unconditional commitment in favor of the defense of the territorial integrity of the Kingdom, and stressed their support for the autonomy plan, under Moroccan sovereignty, with a view to putting an end to this artificial conflict.

The leaders of the region of Laâyoune-Sakia El Hamra had also denounced last week the creation of puppet entities in the Sahara aimed at undermining the territorial integrity of the Kingdom and its constitutional and human rights achievements.

Aminatou Haidar and a handful of her local supporters serve the agenda of the Polisario and the Algerian regime. They abuse the freedom of speech and movement prevailing in the Moroccan Sahara, unlike the situation in the Polisario-controlled Tindouf camps in southern Algeria where the sequestered Sahraouis are experiencing harsh living conditions, lacking water, medicine, food and are denied basic rights.