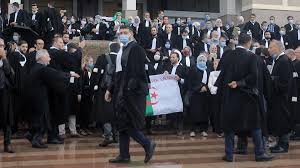 Several Algerian lawyers have staged over the weekend a sit-in at the country’s capital city to protest against lack of freedoms, growing restrictions and escalating oppression.

After their protest rally, the lawyers started a week-long strike demanding independence of justice, respect of the right to defense, and release of pro-democracy activists jailed by the authorities not for crimes committed but for having exercised their freedom of speech and expression as guaranteed by the constitution.

During their sit-in, the lawyers chanted Hirak slogans such as “civilian and not military state”, “regime change” or “the people want an independent justice”.

According to the protesters, the authorities are seeking by all means to silence freedom voices using intimidation, torture and repressive laws to arrest, convict and jail unjustly vocal critics of corruption, nepotism, power abuse, mismanagement…

Several independent journalists have been imprisoned for their coverage of the Hirak, the mass protests in Algeria that toppled the North African country’s longtime president Abdelaziz Bouteflika last year.

Even foreign media and human rights defenders are harassed and facing increasing restrictions. French TV channel M6 has been banned lately in Algeria after broadcasting a documentary on the popular demonstrations that have engulfed the country since February last year.