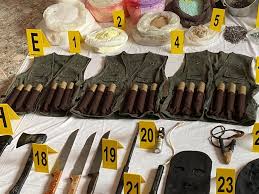 After a master-strike that led to arresting six would be suicide-bombers, Morocco’s bureau for judicial investigation (BCIJ) found more explosive material hidden in a car in the residency where the sister of the group’s leader lived in Temara, near Rabat.

The terrorist group loyal to IS was busted last week in an operation in which six explosive belts were found and a law enforcement officer injured.

The leader of the group owned a refrigerated car loaded with material that could be used for bomb making.

Last week, Morocco’s senior security officials said the country avoided a tragedy by the arrest of the six individuals.

Morocco has largely been insulated from terrorist attack with the latest since 2011 taking place in late 2018 when two Scandinavian tourists were slaughtered by a group loyal to IS.

In 2019, Moroccan security services arrested more than 125 people, dismantled over 25 terrorist cells in the early stages of planning attacks against a range of targets, including public buildings, public figures, and tourist sites.

BCIJ, often described as the Moroccan FBI, has played an active role in aborting terrorist attacks both at home and abroad.