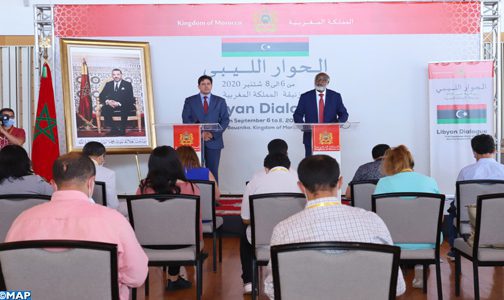 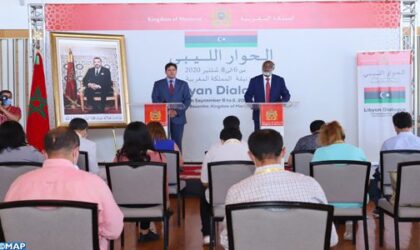 Delegations of the Libyan High Council of State and the Tobruk Parliament expressed, on Thursday in Bouznika, their thanks and gratitude for Morocco for its efforts in putting the Libyan dialogue back on track, as well as for its impartial position.

Speaking shortly before the reading out of the final joint statement issued at the end of the Bouznika meetings, Fawzi Aqab, member of the delegation of the Libyan High Council of State, expressed gratitude to Morocco for its efforts to create adequate conditions for dialogue and to King Mohammed VI for his continued support and assistance to help the Libyan people and achieve stability and security in Libya.

He also affirmed the great confidence in Morocco’s “impartial and neutral” position, which has created the appropriate climate and conditions for dialogue in order to find solutions to the crisis in Libya.
Actually, Morocco has repeatedly made it clear that it has no agenda and no initiative in Libya and no desire to choose among the Libyans, regardless of developments on the ground.

Morocco has always been and will continue to be eager to create a space for the Libyan parties to engage in constructive dialogue without non-Libyan interference, he added.

For his part, the representative of the Libyan House of Representatives, Essam Al Jahani, expressed his thanks to Morocco for hosting the dialogue meant to reach a solution to the Libyan problem. Morocco has facilitated this dialogue by all means, he said.

He added that the Bouznika meetings will be the prelude to the process of a great political solution for Libya that will take the country out of the current situation and lead it towards unity, security, and stability.

Essam Al Jahani also highlighted the “very great” harmony between the two delegations, stressing that Libyans are capable of reaching, through dialogue, solutions to the country’s problems in the interest of the Libyan people and future generations.

The two Libyan delegations gathered in Bouznika, a coastal town to the south of capital Rabat, this September 6 through 10 to discuss means to preserving the ceasefire announced on August 20 and paving the way to a peaceful solution to the Libyan crisis.

The Libyan-Libyan dialogue in Bouznika reached a comprehensive agreement on the criteria, mechanisms, and objectives for “assuming positions of sovereignty,” according to a joint statement read out at the end of the meetings.
The two parties vowed to continue the dialogue launched in Morocco and to meet during the last week of September to finalize the agreement.

Several countries and international and regional organizations, including the United Nations, the African Union, the European Union, and the CEN-SAD group, have commended Morocco for facilitating the inter-Libyan dialogue.