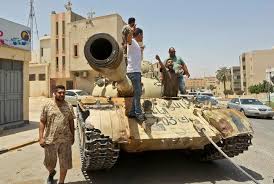 The head of the Libyan government of national unity (GNA) on Saturday appointed a new Minister of Defense and a new Chief of Army Staff.

Fayez al-Sarraj, at the head of the GNA, appointed Colonel Salah Eddine al-Namruch to the Defense portfolio and Mohamad Ali al-Haddad as Chief of Staff of the Libyan army. Ali al-Haddad was raised to the rank of General.
These appointments were expected and came against a backdrop of popular protest.

Vacant for more than three years, the post of Minister of Defense was kept as a kind of reward.

“It was finally to be awarded, after the victory of the GNA at the battle of Tripoli,” explains Jalel Harchaoui, a researcher at the Institute of International Relations in the Netherlands.

Salah Eddine al-Namruch, the new Minister of Defense, had until then been deputy minister in the ministry and, according to Jalel Harchaoui, he distinguished himself during the fourteen months of fighting in Tripoli.
Politically, he is also rather pro-Turkey, whose help proved decisive in keeping the city, following the offensive of Marshal Haftar’s forces.

The new Chief of Staff of the Armed Forces, Mohamed Ali al-Haddad, who until now commanded the military zone in the center of the country, is from Misrata, a town located 200 km from the Libyan capital, where the powerful armed groups that fought alongside the GNA originated. However, he remains “uncharismatic, discreet and without an international dimension,” according to Jalel Harchaoui.

According to the researcher, his appointment will therefore not reassure the supporters of the Minister of Interior, Fathi Bashagha, also from Misrata, who was suspended this week after the demonstrations of the population against the deterioration of living conditions that he is accused of encouraging.