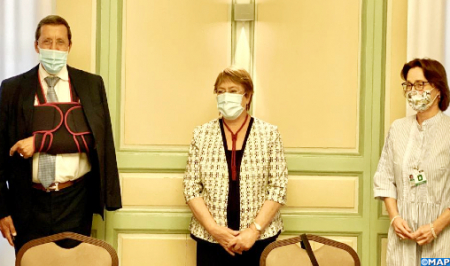 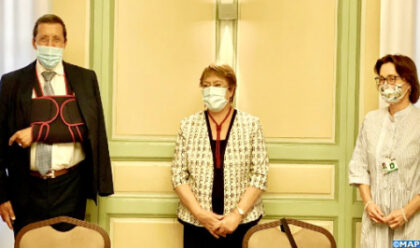 Morocco’s Permanent Representative the UN, Omar Hilale, and the Swiss Ambassador Pascale Baeriswyl on Friday held a working session in Geneva with the United Nations High Commissioner for Human Rights, Michelle Bachelet, and her team.

The meeting, held as part of the two diplomats’ mandate to facilitate the process of strengthening the UN Human Rights Treaty Bodies, focused on several issues of importance to the Office of the High Commissioner for Human Rights and the latter’s expectations of this process.

The ambassadors of Morocco and Switzerland briefed the UN official on the progress of the process of strengthening the Treaty Bodies and the various consultation meetings conducted in New York and Geneva with all the stakeholders concerned, in particular the Member States of the UN, the Presidents of the Treaty Bodies, the civil society and the national human rights institutions.

The two diplomats highlighted the close collaboration with the teams of the Office of the High Commissioner for Human Rights in charge of the Treaty Bodies and commended the precious support they provide to this process.

The UN official praised the efforts made by Morocco and Switzerland to improve the work and functioning of these bodies. She thanked the two ambassadors for their strong commitment to this issue and welcomed the inclusive and transparent approach they have adopted on this process. She also underlined the interest given to this process by the various stakeholders.

This meeting is part of the process of strengthening the Human Rights Treaty Bodies, which the two ambassadors have been leading since their appointment by the President of the United Nations General Assembly, as facilitators, last April.

The leadership of King Mohammed VI in the area of human rights and the achievements made by Morocco in this field under the leadership of the Sovereign led to the election of several Moroccan experts as members or chairs of the UN Human Rights Treaty Bodies.