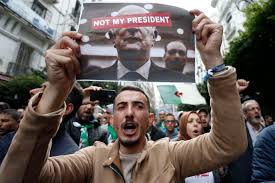 Algeria will hold on November 1 a referendum on the new draft constitution, which grants more power to the parliament and the Prime Minister following several months of protests that led to the partial overhaul of the previous regime.

The Presidential office announced the date Monday following a meeting between the President and the head of the election authority Mohamed Chorfi.

The current President, a former official of the previous regime came to power in December through booed presidential elections, boycotted by millions of Algerians who had been protesting for a complete change at the top of the country’s leadership.

Popular weekly demonstration known as Hirak, began in February last year after former leader Abdelaziz Bouteflika was rumored to be seeking a fifth term in office despite his ailing conditions. The former leader was forced by the army to step down in early April.

Several figures of the regime including two former Premiers, have been arrested and handed lengthy prison sentences in connection with corruption and other charges.

To appease tensions in the North African country, the new President pledged to introduce political and economic reforms.

The draft constitution, released earlier this year, will, if voted, limit terms to two mandates. It will also grant more power to the prime minister and parliament.