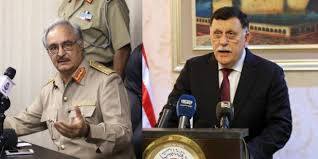 Libyan rebel warlord Khalifa Haftar Sunday tossed away the proposal made by the UN-backed Government of National Accord (GNA) for truce between the two warring sides as he blames Turkey for preparing assaults on key cities of Sirte and Jufra.

Mesmari also said that the GNA and its prominent ally Turkey were preparing offensives on Haftar’s bases in Sirte and Jufra.

“Over the past 24 hours, we monitored Turkish warships and frigates advancing toward Sirte, and they are in an offensive position,” he noted.

It is the first comments by the Haftar said since Friday when Serraj ordered allied forces to comply with an immediate truce in the country and instructed them to halt all combat operations across Libya.

Serraj’s ceasefire proposal followed announcements by the GNA and Haftar-backed House of Representatives (HoR) based in Tobruk of an immediate ceasefire in the Sirte and Jufra regions and agreement to hold presidential and parliamentary elections by March 2021.

Both the GNA and Haftar-backed administration have been haggling about the control of the oil-rich country, which descended into chaos following the assassination of former leader Muammar Gaddafi by a NATO-led uprising.