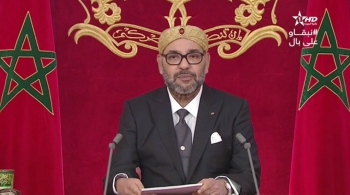 King Mohammed VI has urged citizens to strictly abide by coronavirus precautionary virus warning that a complete lockdown could be restored if cases continue to surge.

“Despite the efforts made so far, we have not yet won the battle against this epidemic. Needless to say, these are difficult, unprecedented times for everyone,” said the King in a speech on the occasion of the 67th anniversary of the Revolution of the King and the People.

He recalled that Morocco was cited as an example for its effective management during the initial phase of the pandemic when Moroccans have shown collective mobilization.

“During that early phase, and thanks to the concerted efforts of each one, we managed to limit the repercussions of the crisis on people’s health and to mitigate its socioeconomic impact,” said the King, highlighting the measures taken by authorities to assist large segments of the people.

However, with the lifting of the lockdown, the number of infections has increased threefold, with infections among health workers spiking from 1 per a day to ten per a day, the monarch said.

The King also rebuked those who are in the denial of the virus and those who do not abide by precautionary measures such as the wearing of masks, social distancing, hygiene and the use of disinfectants despite the availability and affordability of such products.

Those who do not care about the well-being of others by ignoring precautionary measures are endangering the lives of others, the King said.

Such conduct runs counter to patriotism and Moroccan values and undermines government efforts to curb infection, he said, noting that the state’s resources are finite.

“The deterioration of the health situation today is unfortunate and does not leave much room for optimism. Whoever tells you otherwise – Dear Citizens – is simply lying to you,” the King deplored.

He said that a complete lockdown with tougher restrictions might be imposed if cases continue to rise.

“My message to you today is not meant to be one of rebuke or blame. I am simply relaying directly to you my fear that the number of infections and deaths might – God forbid – continue to grow, thus compelling us to return to a complete lockdown, with its psychological, social and economic repercussions,” said the Sovereign.