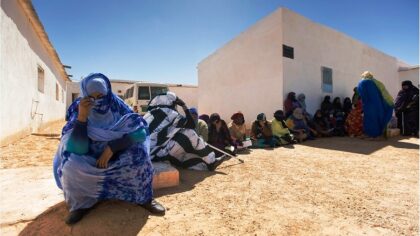 The Algerian regime made a volt-face concerning the coronavirus outbreak ending weeks of denial and asking forurgent help to contain the virus in the Polisario-run camps.

Algeria has abdicated its sovereignty, giving a part of its territories and leaving thousands of Sahraouis under the mercy of a totalitarian separatist militia, which unrelentingly crack down on dissidents.

Weeks ago, many rights NGOs have warned the Algerian regime of the omens of the coronavirus outbreak in the camps. Such calls fell on deaf Algerian ears.

Algeria itself has been excluded from a list of safe destinations by the EU in view of the surge of the pandemic in the country which has one of the highest infection and death rates in the continent.

On Saturday, Algeria has registered 30950 cases including 1223 deaths. The number of infections is but the tip of the iceberg as Algeria carried fewer tests so far.

The African Development Bank said the Algerian economy is the third worst hit in Africa at a time the country faces a multi-pronged political, economic and social crisis worsened by lack of political reforms.

The Polisario and the Algerian regime have recently been at the heart of an aid embezzlement scandal after the Polisario-administered Red Crescent was found guilty of sending aid to stores run by the trade division of the militia to be sold instead of being distributed for free to the targeted vulnerable civilians.

The theft of humanitarian aid has shown cracks within the separatists’ edifice after senior Polisario leader Bashir Mustapha Sayid called for the leadership to step down because of its involvement in what he described as “piracy in Tindouf” amid coronavirus concerns.

Algeria has tried to play down the scale of the chaos within the camps and the risk facing the population held against its will in the camps by imposing a media blackout.

Recently, a movement was created challenging the Polisario’s obsolete stands and ideology and calling for openness to a political and mutually acceptable solution to the conflict, breaking away with the stands of the Algerian host and sponsor.

Many Sahraouis have fled the camp en masse at the risk of being shot at, seeking shelter in Mauritania over fears of the coronavirus outbreak, Mauritanian media reported.