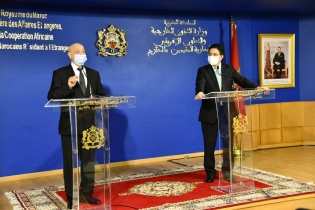 Libyan protagonists in Morocco, Algeria desperately looking for a spotlight

Speaker of the eastern-based Libyan parliament Aguila Saleh (pro-Haftar) and his foe Khaled al-Meshri, Chairman of the Libyan High Council of State of the internationally-recognized Govt of National Accord, both visited Rabat on Monday seeking Morocco’s backing for the resolution of the conflict in their war-torn country.

The two Libyans, who did not meet each other in Rabat, conferred separately with senior Moroccan officials and outlined their visions for the settlement of the crisis. Their visit to the Kingdom shows the importance of Morocco’s mediating role in the Libyan conflict.

This role confirms the growing international stature of Morocco under the leadership of King Mohammed VI.

But this has irked neighboring Algerian leaders to the point that their Foreign Minister Sabri Boukadoum rushed to contact through the phone his Libyan peer Mohamed Taher Siala of the UN-backed Government of National Accord (GNA).

During this telephone conversation, the Algerian minister spoke about “coordination between the two countries in a bid to return to the political process and dialogue in Libya, and the role that Algeria plays in this regard.”

According to some press reports, Mr. Boukadoum phoned Mr. Aguila Saleh and Khaled Al Machri shortly after their arrival in Morocco and talks with Foreign Minister Nasser Bourita, and Speakers of the two Chambers of the Parliament.

While Algeria opposed the peace initiative spearheaded by Aguila Saleh, Morocco’s top diplomat said the initiative “includes several elements that can be used for the development of Libyan institutions, the presidential council or other agencies”.

Aguila Saleh said his initiative is part of the follow-up of the Skhirate political agreement, signed in December 2015 in Morocco.

Morocco had hosted several rounds of Libyan dialogue before and after the signing of the Skhirate agreement, the latest was the April 2018 negotiations between Aguila Saleh and Khaled al-Meshri.

Some analysts note that the North African kingdom is seemingly pushing for a new “Skhirate 2” agreement, based on the first one.

Morocco has repeatedly stressed that the Skhirate political agreement should serve as a basis for any realistic political solution in Libya.

At the end of last month, Morocco had called for the establishment of a limited Arab team from Arab countries concerned with the Libyan file, to set a strategic vision for a collective Arab initiative for settling the crisis in the Maghreb country, stressing the necessity of opening up to all Libyan parties, listening to them and bridging their views.

The recent escalation in Libya has worried Morocco and Libya’s neighbors in general, particularly in light of Turkey’s continuous threats that it will back the GNA attack Sirte and the oil terminals.