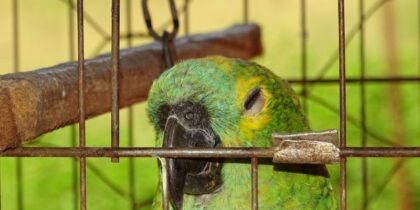 A joint operation by Moroccan and Spanish police led to the arrest of 28 people suspected of trafficking in endangered wild birds and the seizure of about 300 exotic birds exported from southern Spain to North Africa.

The announcement was made lately by the Spanish Civil Guard, which opened an “Oratrix” investigation aimed at combating the destruction of biodiversity.

The investigation on the criminal activity, conducted by Spanish police in collaboration with the Moroccan police, led to the arrest of 28 bird traffickers and the recovery of 280 endangered birds, valued at over €1 million.

The confiscation took place in southern Spain in the cities of Malaga, Murcia, Grenada, Alicante and Asturias.

According to the European Union Agency for Law Enforcement (Europol), buses headed from Spain to the African continent would stow away the birds for delivery with the support of a Moroccan citizen working for a travel agency.

Some of the wild birds were destined for Africa, while usually the trafficked species are smuggled out of the continent and destined to the rest of the world, in a lucrative trade that generates hundreds of thousands of euros every year on the black market.

The network also used a fabricated online business that would generate sales and receive payments, but never deliver the birds.

All of the birds the police recovered are endangered species protected by the Convention on International Trade in Endangered Species of Wild Fauna and Flora (CITES).