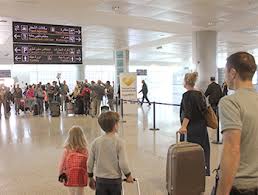 A group of 149 European tourists touched downed on Sunday at Enfidha-Hammamet international airport, heralding the resumption of travel industry and tourism in the North African country.

The visitors will be accomodated in the resort city of Sousse.

The flight is the first from the 27-country bloc since Tunisia opened its sky on July 1st for the resumption of international travel industry after three of months of hiatus owing to covid-19 pandemic.

Tunisia is part of a shortlist of 15 countries around the world considered safe.
The North African country needs a pick-up of tourism sector for its economy. The tourism industry is the second largest GDP contributor with close to 8 per cent, behind agriculture.

According to estimates, tourism will lose $1.4 billion because of the COVID-19 pandemic.

In March Tunisia closed its borders and imposed a lockdown, closing restaurants, shops, public places and several businesses as part of efforts to stem the spread of the respiratory disease.