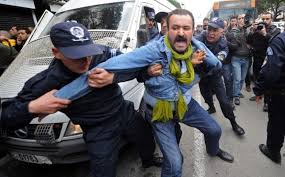 The Algerian authorities have arrested lately three leading figures of the “Hirak” protest movement amid the covid-19 pandemic, which has not prevented the oppression machine from prosecuting and convicting pro-democracy activists, political opponents, journalists and bloggers.

The arrest of Hakim Addad, Zoheir Keddam and Fodil Boumala has been confirmed by the Algerian League for the Defense of Human Rights (LADDH).

Local and international human rights watchdogs have denounced their arbitrary arrest and the escalating repression by the Algerian authorities, which are seeking by all means to silence Hirak activists who are demanding real democratic and political changes.

This is not the first detention of the three hirak leaders. Hakim Addad is a human rights activist and founding member of “Rally Action Youth”. Fodil Boumala is a journalist, who is prosecuted for “undermining national unity”, while Zoheir Keddam, is a member of the movement “Orange Vests” which endeavors to prevent clashes between police and demonstrators and was behind the weekly “Hirak” marches.

According to the Algerian national committee for the release of detainees (CNLD), there are currently in the country about 100 prisoners of conscience, most of them jailed for facebook posts criticizing corruption of the authorities, their injustice, the deteriorating socioeconomic situation and mismanagement of covid-19 response.

According to reporters without borders, the unstable political environment in Algeria is increasing the threats to press freedom. The Algerian authorities continue to step up their harassment of the media. Journalists covering the “Hirak” protests are often detained for questioning, placed in police custody or even jailed for extended periods.

As a result of judicial harassment, the Algerian journalists struggle in daily job and are under a growing pressure. They call on the international community not to forget the struggle for democracy in their country, saying that muzzling the press helps the army-controlled regime to suppress peaceful protesters and torture them with impunity.