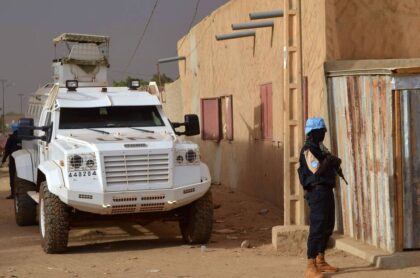 Two Egyptian peacekeepers were killed by “unidentified” gunmen in northern Mali on Saturday June 13. UN soldiers were providing security for a MINUSMA logistics convoy that was bivouacking when gunfire erupted. The peacekeepers returned fire, a UN statement said.

The logistical convoy was linking Tessalit and Gao (North) when it was attacked at around 7 p.m. local time. The convoy “was at a standstill” when it was attacked “towards the commune of Tarkint, north-east of Gao”, the largest city in northern Mali. “The UN peacekeepers responded firmly and put the attackers on the run,” the UN force said.

“We will have to make every effort to identify and apprehend those responsible for these terrorist acts so that they are brought to justice for their crimes,” he continued.

MINUSMA has about 13,000 soldiers in Mali, the scene since 2012 of a multifaceted crisis that has left thousands dead and hundreds of thousands displaced.