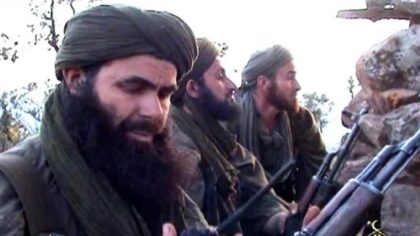 Al Qaeda leader in the Islamic Maghreb (AQIM), Algerian Abdelmalek Droukdal, was killed by French forces and their allied military in an operation in northern Mali, near the Algerian border, French Defense Minister announced on Friday.

the key Islamist fighter and mentor of several Sahel jihadist groups that French forces had been hunting for more than seven years, was killed in an operation on Wednesday along with several people in his entourage, Defense Minister Florence Parly wrote on Twitter.

“On June 3, French army forces with the support of their local partners, killed Al Qaeda in the Islamic Maghreb’s emir, Abdelmalek Droukdel, and several of his closest collaborators, during an operation in northern Mali,” Ms Parly tweeted.

“Abdelmalek Droukdal, member of the Al-Qaida steering committee, commanded all of the Qaida groups in North Africa and the Sahel strip, including Jama’a Nusrat ul-Islam wa al-Muslimin (JNIM), one of the main terrorist groups active in the Sahel”, the French minister said.

JNIM has claimed responsibility for devastating attacks on the Malian military and UN peacekeepers trying to stabilize the volatile country.

Droukdel, aka Abu Musab Abdul Wadud, fought in Algeria’s civil war in the 1990s and rose to prominence as the top emir of the main Algerian insurgency movement in 2004.

He later transformed the Salafist Group for Call and Combat, known as the GSPC, into AQIM, spreading the movement across Africa’s Sahel region under the umbrella of the global terror network.

AQIM, which has made millions of dollars from ransoms paid for the release of abducted foreigners, has received allegiance from several jihadist groups active in the Sahel, gathered since 2017 within the Support Group for Islam and Muslims (GSIM), led by the Malian Tuareg Iyad Ag Ghaly.

Until recently, Droukdel was believed to be hiding in the mountains of northern Algeria.

France also claimed Friday evening the capture of a “major militant of the ISGS”, the jihadist Islamic State in the Greater Sahara, rival of the GSIM in the Sahel and designated enemy number one by Paris.

Ms Parly said in another tweet that French forces, which number about 5,200 in the region, had also on May 19 captured Mohamed el Mrabat, a fighter she identified as a veteran militant and member of ISGS.

She said the operations dealt a “severe blow” to terrorist groups in the region that had been operating for years despite the presence of thousands of French, UN and other African troops.

The French anti-jihadist force Barkhane has multiplied offensive operations in the Sahel in recent months, in an attempt to stem the spiral of violence which, combined with inter-community conflicts, has caused 4,000 deaths in Mali, Niger and Burkina Faso last year, five times more than in 2016 according to the UN.