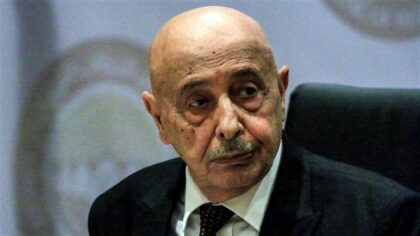 Speaker of the House of Representative (HoR), the Libyan east-based parliament, has met with leaders of militias of self-proclaimed Libyan National Army (LNA) led by retired Gen. Khalifa Haftar, in a clear rejection of the latter.

The militia leaders have been fighting on the side of Haftar in his campaign to seize capital Tripoli from the UN-backed Government of National Accord (GNA).

Longtime ally Issa has distanced himself from Haftar after the rebel commander declared himself the rightful and sole leader of the oil-rich African country and rejected the Skhirat agreement, the Libyan agreement signed in December 2015 which birthed the GNA.

Issa has approved a political approach to end the Libyan crisis. The plan, which received Russia’s backing, is opposed to Haftar’s military option.

Issa, who sees himself as the “Supreme Commander of Armed forces” in reference to the LNA, plans to appoint Al-Nadori as the successor of Haftar, to lead the militias, MEMO notes.