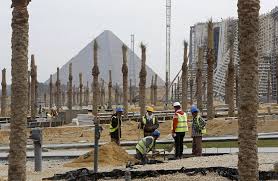 Egypt has instructed all governorates to halt all construction projects for a period of six months.

Local Development Minister Mahmoud Sharawi announced Monday the cabinet decision and instructed all local governors including those of Greater Cairo and Alexandria to make sure the order is fully implemented.

Sharawi also urged local officials to tour cities and municipalities to monitor any violation attempts, warning that offenders will be tried before a military court, local media report.

The media did not elaborate on rational behind the cabinet’s decision.