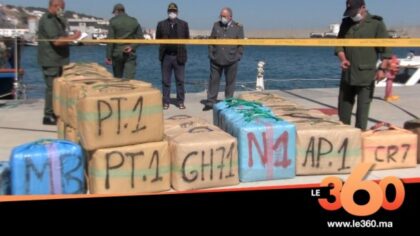 Marine Units of the Moroccan Royal Gendarmerie (County Police) seized on Monday more than four tons of drugs off tangier’s coasts after chasing down two fishing boats used by the smugglers. Seven involved people were arrested.

According to local press reports, the dealers stole two small fishing boats from Tangier’s City port before sailing to the Rmilat forest near Merkala beach where they loaded 70 bales of cannabis.

After loading the drug, the smugglers set sail for the high seas to hand over the banned substance to other people in a third boat, but they were intercepted by the marine patrolling units of Gendarmerie Royal after a high-speed sea chase.

An investigation was opened under the supervision of the prosecutor’s office to identify, capture and bring to justice all those involved in this major smuggling operation.

On Sunday, Moroccan authorities announced the arrest in Tangier of a police officer, working for the local Directorate General of Territorial Surveillance (DGST), and three other people for narcotics trafficking and links with international networks of dealers.

The three nabbed people were active in international drug trafficking networks and involved in the cocaine shipment seized lately at Tanger-Med port. They benefited from the complicity and cover up of the arrested DGST police officer who turned a blind eye to their criminal activities for bribes.