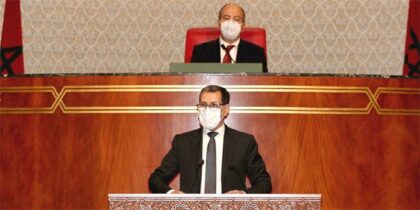 The Moroccan government has decided to extend the state of health emergency for three more weeks until June 10.

The announcement was made by Head of Government Saâd-Eddine El Othmani this Monday before the Parliament’s two chambers.

The state of emergency, previously scheduled to end on May 20, was one of Morocco’s boldest measures to curb the spread of the COVID-19 pandemic by restricting the movement of citizens and enforcing social distancing.

The extension aims to avoid the emergence of virus hotspots and confirms that the country grants priority first and foremost to the protection of human lives, El Othmani said.

Saâd-Eddine El Othmani, said the extension of confinement aims to fight the “vectors” of the spread of Covid-19, especially during the holiday period of Eid el-Fitr, preceded by the celebrations of the night of Destiny on Ramadan 26.

the “R0”, reproduction rate of the virus, must remain below one for more than two weeks, and must be less than 0.7 for maximum safety. Currently, the R0 in Morocco is 0.9. Previously it was as high as 2.9, according to El Othmani.

“We do not want Eid el-Fitr to turn from celebration to mourning,” said the head of government.

The worrying appearance of new clusters, within families or in industrial units, does not allow to end the confinement now, added El Othmani, indicating that health authorities identified 467 hotspots since the start of the outbreak, accounting for 65% of the total cases and that half this 65% came from family gatherings, either celebrations or funerals. At present, twenty-seven hotspots remain active, he said.

With 99 new cases from just three hotspots on Sunday, El Othmani warned of the “seriousness” of the issue.

The head of Government deplored that some citizens are not respecting lockdown measures as strictly as they were at the start.

Ministers and experts have been discussing the situation for some time before making the extension, he said.

“It was difficult to balance between socio-economic damage and health threats. Every solution has negative sides.”

After Eid el-Fitr, marking the end of Ramadan, there will probably be a gradual lifting of the confinement, which would allow in particular a revival of certain economic sectors with strict compliance with security and protective measures, namely the compulsory wearing of masks and social distancing.

Morocco enforced the state of health emergency on March 20 for one month. The country had recorded at the time 86 COVID-19 cases and had just started detecting the first patients who contracted the virus locally.

The emergency was extended for an additional month on April 20 as the number of COVID-19 cases in the country exceeded 2,500.

As of this Monday morning, Morocco has recorded 6,930 coronavirus cases, and 192 deaths, while 3,732 patients have recovered.