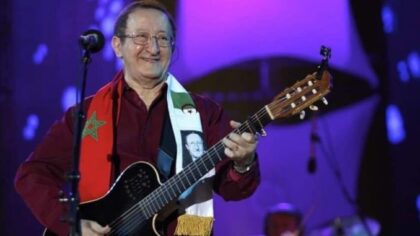 Icon of Amazigh music in Algeria, Hamid Cheriet, better known as Idir, has been buried in Paris instead of his beloved Kabyle region after the Algerian regime declined requests for the repatriation of his body.

Idir died on May 3 in France at the age of 70 after a long struggle with pulmonary disease leaving behind a rich repertoire of music that brought Amazigh poetry and language to the international scene.

Idir became internationally famous with his lullaby “Vava Inouva” in 1976. He modernized and promoted the richness of kabyle melodies and poetry, popularized North African culture, and advocated Amazigh cultural rights.

His songs show a skillful blend of traditional instruments: the shepherd flute which he learned to play as a child, the bendir (a frame drum), the tambourine, and darbuka (a goblet-shaped drum) accompanied by the guitar, bass, and drums.

After 38 years in exile, Idir returned for a concert in Algeria in 2018 and expressed his disappointment with the ideology adopted by the regime since independence, which has marginalized his culture and language.

Two years later, he proudly talked in interviews in support of the peaceful protests in demanding a break away with authoritarian rule in the country.

“I loved everything about these protests: the intelligence of these youths, their humor, their determination to remain peaceful,” Idir said at the time.

Idir has often been invited to perform in Moroccan festivals including Mazawine in Rabat, Timitar in Agadir and enchanted fans in Al Hoceima and Tangier.

President Emmanual Macron paid tribute in a tweet, saying the singer had performed “his Kabylie roots with the melancholy of an exile and the brotherhood of peoples with the hopes of a humanist”.

“The poetry of his songs will long resonate from one side of the Mediterranean to the other,” he said.