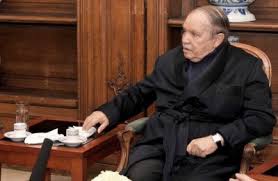 After a well acclaimed and long awaited return of President Bouteflika, doubts have begun to rise from all quarters after being featured by the state television in a short and almost silent video. The video showed the president having a meeting with high dignitaries of his government.
The video has intensified the debate over his health conditions and ability to see over the remaining nine months of his term. The president’s office did declare that “after completing the period of treatment and rehabilitation” for almost 80 days, the president has returned home to “continue a period of rest and rehabilitation.” Algerians were puzzled by the pale and tense appearance of their president seated in a wheelchair and the continuous repetition of the latest footage has created more doubts that assurances.
The media didn’t hesitate to speculate on it as they look forward to the country’s future and fast approaching elections. Questions on whether he can be an active president for his remaining mandate remains unanswered as many conclude that he is out of the 2014 elections.
L’Expression, a daily newspaper, claims that President Bouteflika “never ceased exercising the functions of office” because he continue to take policy decisions and send presidential messages to other countries. Supporters of the president remain hopeful that he will recover in time for the elections.
A critic of Algerian politics, Daoud, said the long absence has given Algerians the opportunity to realize that “Bouteflika was not necessary, but change is necessary.” Bouteflika has promised “to pass the torch to the post-independence generation” last year but the process has not been forthcoming.